At an altitude of 1,000 metres, the floor-to-ceiling windows at the Johann Grill Restaurant in the Kempinski Hotel Berchtesgaden afford diners a panoramic view of unspoilt nature and breathtaking mountains. The lighting concept with ERCO products transfers the vivid, natural light of these uniquely entrancing surroundings into the interior.

The restaurant, which covers an area of some 480 square metres, is in use all day. From breakfasts to candlelit dinners, its ambience is surprisingly varied: using a combination of DALI-controlled LED lighting tools with warm white and neutral white light, the light mood adapts itself to the time of day.

The Kempinski Hotel Berchtesgaden is located, positively majestically, on a mountain plateau in the Bavarian Alps, at an altitude of 1,000 metres, surrounded by the Watzmann, Untersberg and Kehlstein mountains. Previously an InterContinental hotel, since 1 May 2015 the property has been welcoming guests as the third Alpine resort of the Kempinski Group – Europe’s oldest luxury hotel group. Around 150 kilometres (approximately 100 miles) from Munich and just 33 km from Salzburg, travellers from all over the world discover an exclusive retreat here, set amidst natural scenery. The panoramic views of the mountains have a huge impact on the way the space is arranged – not only in the rooms and suites but also, and most notably, in the public areas such as the hotel’s three restaurants.
“In redesigning the Restaurant 360°, now renamed the Restaurant Johann Grill, the idea was to create an upmarket and modern yet cosy ambience which would not compete with the breathtaking view through the floor-to-ceiling windows,” says Klaus Sporer from sporer plus architekten, explaining the interior design concept that was implemented in 2013. “That is why exquisite natural materials such as silk, linen, leather, felt and natural stone with a low-key colour palette of white, beige, grey and natural shades were chosen for both the furnishings and the interior decoration.” At the same time, zones with different types of seating were to be created within this very large space – a floor area of around 350 square metres plus an additional 130 square metres in an adjoining room: private booths and quiet groups of seating, large tables in the open centre of the room, and some raised seating areas to the rear of the room to ensure a good view through the windows from here as well. 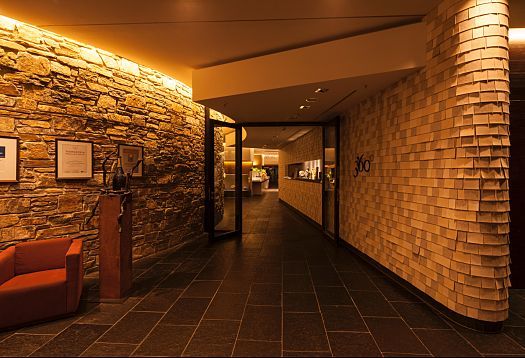 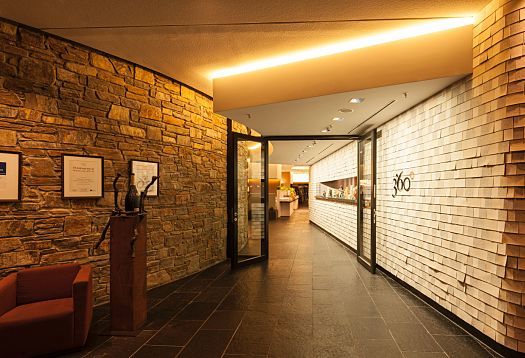 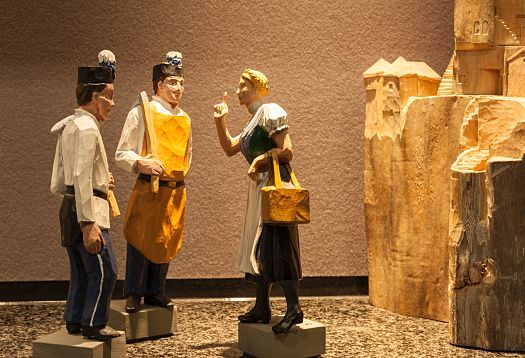 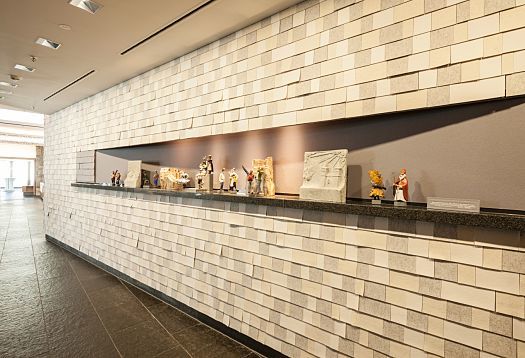 The perception-orientated lighting concept with ERCO products accentuates the desired zoning of the room, emphasising differently illuminated spaces. In the restaurant entrance area, the wall surfaces have been given a grand look: opposite the existing natural stone wall of Stainz gneiss (a type of foliated stone), a wall that has been elaborately dressed with felt shingles is evenly and completely illuminated with Quintessence lens wallwashers; the dynamic white of the spotlights, with colour temperatures of 3000K and 4000K, adapts flexibly to the time of day. Pollux warm white spotlights are used to illuminate typical regional carvings in a niche within this felt shingle wall effectively, the narrowly focused light distribution perfectly picking out the three-dimensional shapes of the figures. The buffet area to the rear of the restaurant, with access to the kitchen, is accentuated and invitingly illuminated with Pollux track spotlights. Neutral white Trion ceiling washlights with the deep-beam option are mounted on four columns that divide the space. Finally, carefully placed neutral white 4000K Quintessence downlights with flood light distribution and 3000K narrow spot Quintessence directional luminaires illuminate the tables. What is paramount here is that the superior regional dishes served at the Restaurant Johann Grill are shown in the best possible light, as a sublime feast for both the palate and the eye. All the ERCO luminaires in the space are controlled by a DALI system. Ceiling, wall and floor surfaces, as well as the furnishings and objects within this space, are illuminated in relationship to daylight levels and as such, this project perfectly sums up what ERCO stands for: high-quality, perception-orientated lighting design, the main elements of which are light mood, atmosphere, and the effect of light on people. 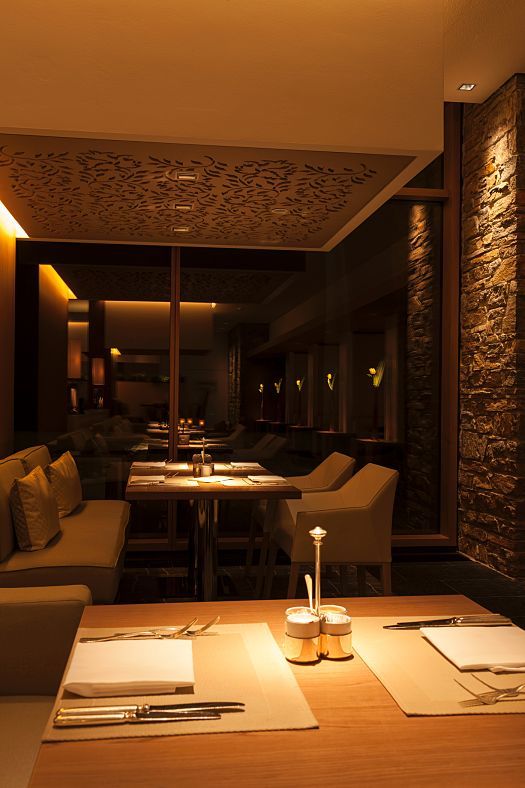 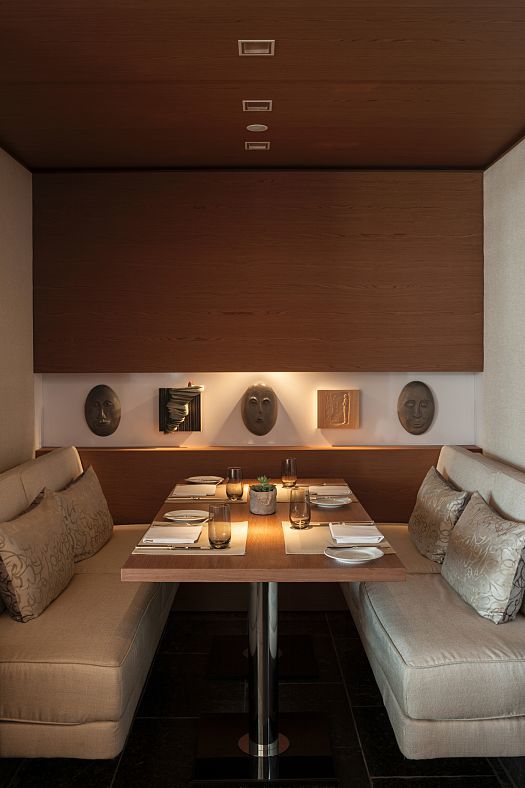 The effect is striking: somebody who has breakfasted in the restaurant and then only returns there for dinner can hardly believe that he is in the same room 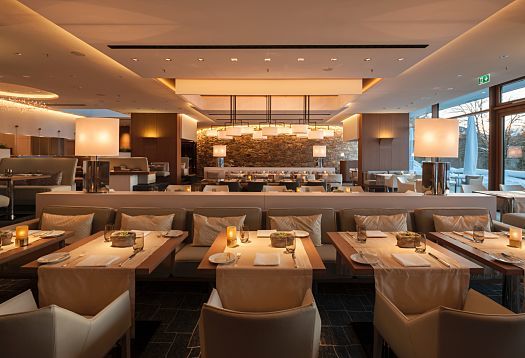 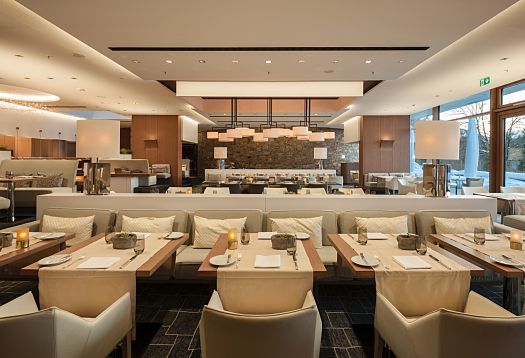 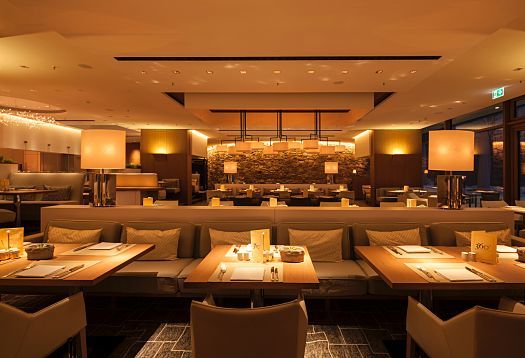 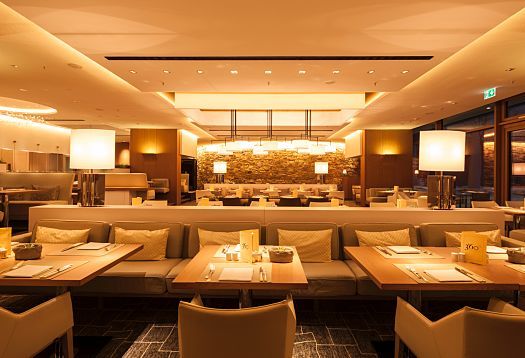 High-calibre room presentation to suit the time of day
“The main challenge of this design was to create a place that would appear pleasing and inviting from the early morning until the late evening, with the right atmosphere and mood for every time of the day,” explains architect Klaus Sporer. “The light is key here – the DALI-controllable ERCO downlights, lens wallwashers and directional spotlights can give the room an entirely different feel throughout the day – from morning time with a quite cool, diffuse 4000K light mood through to evening with 3000K light focused on the tables.” The variable colour dynamics create five different scenarios over the course of the day: breakfast, lunchtime, coffee, dinner and candlelight. Uniform lighting with good colour rendering is made possible by the high quality of the LEDs that ERCO carefully selects on the basis of various criteria, and the precise photometrics that are specially developed in Lüdenscheid.


“The effect is striking: somebody who has breakfasted in the restaurant and then only returns there for dinner can hardly believe that he is in the same room,” Klaus Sporer says. Guests are received in the morning by indirect lighting at 4000K which reflects the freshness of natural morning light. This uniform illumination bathes the room in a pleasantly homogeneous brightness (Quintessence downlights in neutral white with flood light distribution). In the evening, it is the individual tables that are put in the spotlight. Quintessence directional luminaires with narrow spot characteristic and warm white LEDs provide powerfully directed, brilliant illumination, making the plates, wine glasses and candles on the tables the central focus. The ceilings, in contrast, disappear completely from the diner’s perception with this lighting scenario. The restaurant then exudes a warm, elegant atmosphere, as a comfortable and luxurious retreat in the middle of the Alpine mountain world. 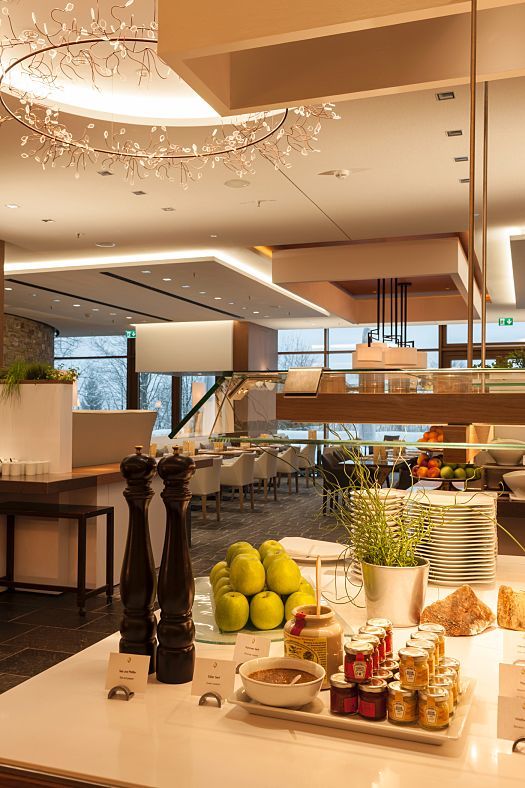 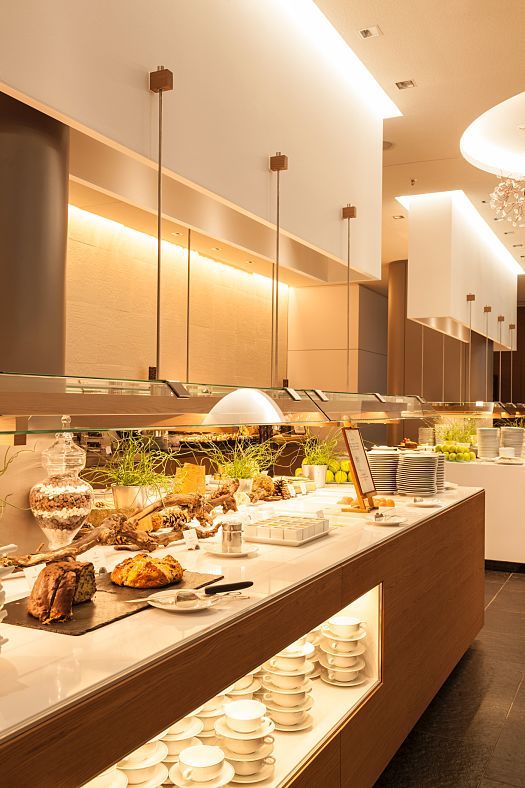 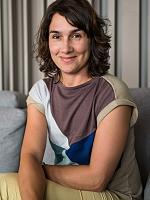 Kristina Raderschad has run an editorial office in Cologne since 2005. A qualified interior designer (Dipl.-Ing.), her articles, reports and interviews on architecture and design are published worldwide – in magazines such as AD Architectural Digest, A&W, ELLE DECORATION, HÄUSER, MARK or WALLPAPER *.