Right on time for its '50 years of the Schauspielhaus' anniversary, the theatre located on Gustaf Gründgens Platz and built in 1970 celebrated its reopening in January 2020 after an extensive refurbishment implemented by ingenhoven architects. All public areas of the striking building designed by Bernhard Pfau now radiate in new light—thanks to LED lighting solutions that have been individually adapted to the listed structures on site.

The organically curved structure of Düsseldorf's Schauspielhaus, together with the neighboring Dreischeibenhaus office building, forms one of the most important architectural ensembles of German post-war modernism. Ingenhoven architects, whose design for the new business and office complex Kö-Bogen II is currently being constructed at Gustaf Gründgens Platz and will complement the ensemble, was awarded the contract for renovating the listed theatre. In the course of renovation the historic structure of the building, divided into a large theatre with around 760 seats and a smaller theatre with up to 300 seats, was preserved. The roof and facade were renewed and all public areas modernized in compliance with strict preservation orders.

"The original lighting concept by lighting designer Hans T. von Malotki was also retained as far as possible but completely revised technically. In some areas the concept was expanded and adapted to the new requirements of the Schauspielhaus, and always in close consultation with the monument conservation authorities," explains lighting designer Professor Clemens Tropp (Tropp Lighting Design GmbH). 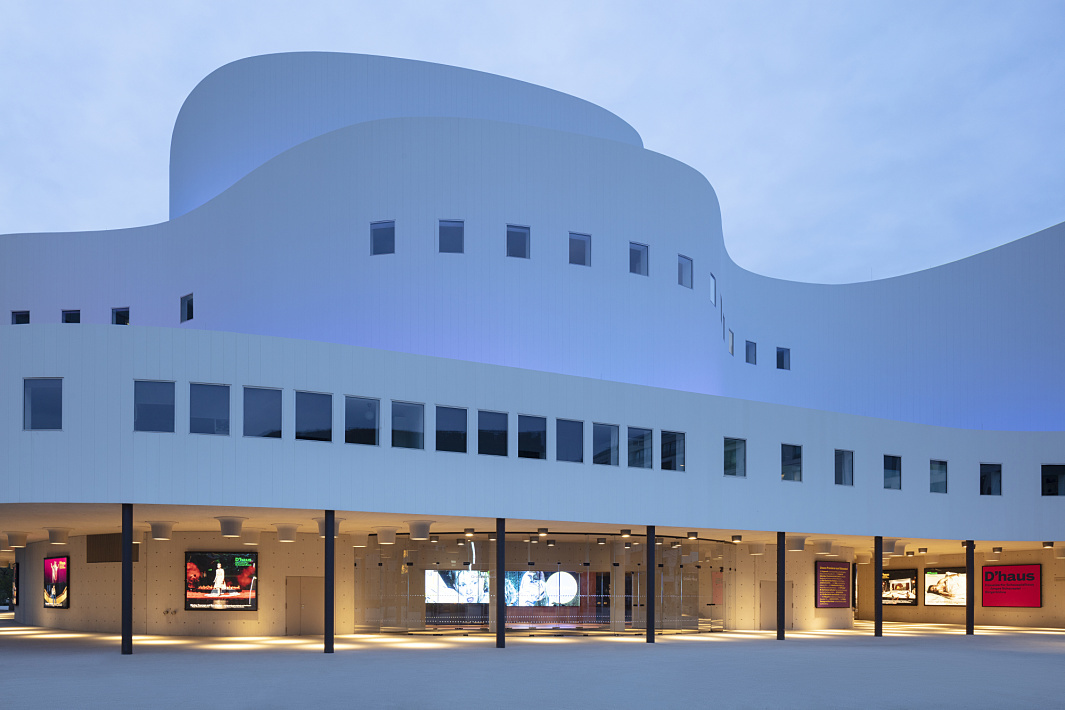 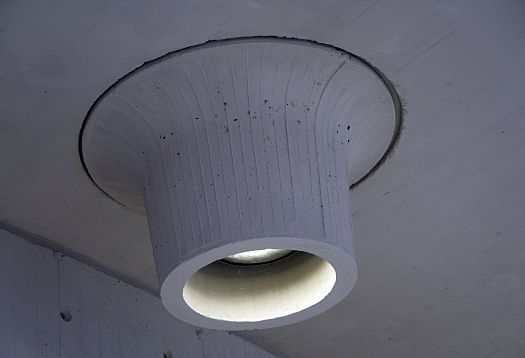 Fluorescent lamps in distinctive conical concrete bodies on the undersides of the ceilings were originally used to illuminate the outdoor space between the small theatre and large theatre. These 'concrete volcanoes' were preserved during refurbishment of the Schauspielhaus as a listed building, but were equipped with state of the art lighting technology: based on Kona projectors for outdoor applications, customized lighting solutions (DALI control, 55W LED) were developed as part of the 'ERCO individual' service, with spot distribution directing light onto the floor and creating grazing light to illuminate the walls of the sculptural concrete structures.

An essential aspect for the architectural concept of the reconstruction was the (re)establishment of visual references between the urban space and the Schauspielhaus. In consultation with the monument protection authorities the entrance to the large theatre was designed much more openly and transparently. The tinted panes of the facade were replaced by clear glass. The lighting ambience of the new entrance area is now inviting and at the same time festive: in the evening hours the new lighting creates a radiant warm light that is visible from the outside. 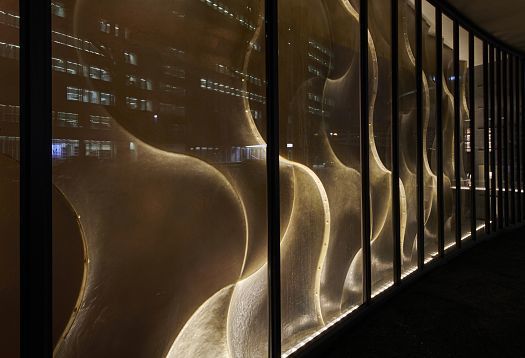 The stylish polyester resin walls in the walkway are now illuminated from bottom to top with the help of Lightgap grazing light wallwashers installed on the floor between the inner and outer walls. This emphasizes the 3D effect of the relief. 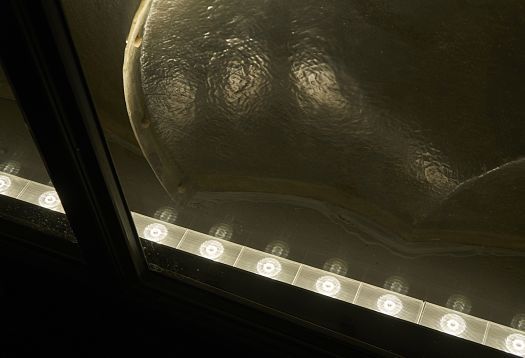 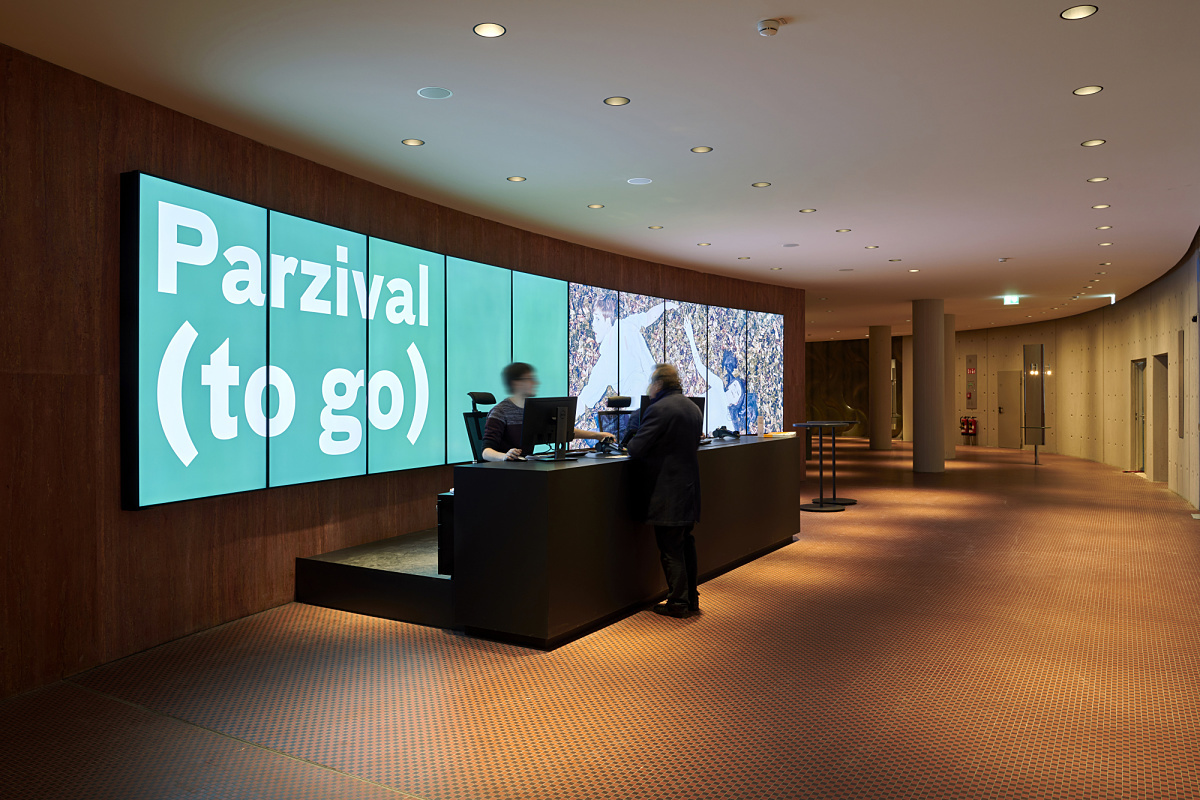 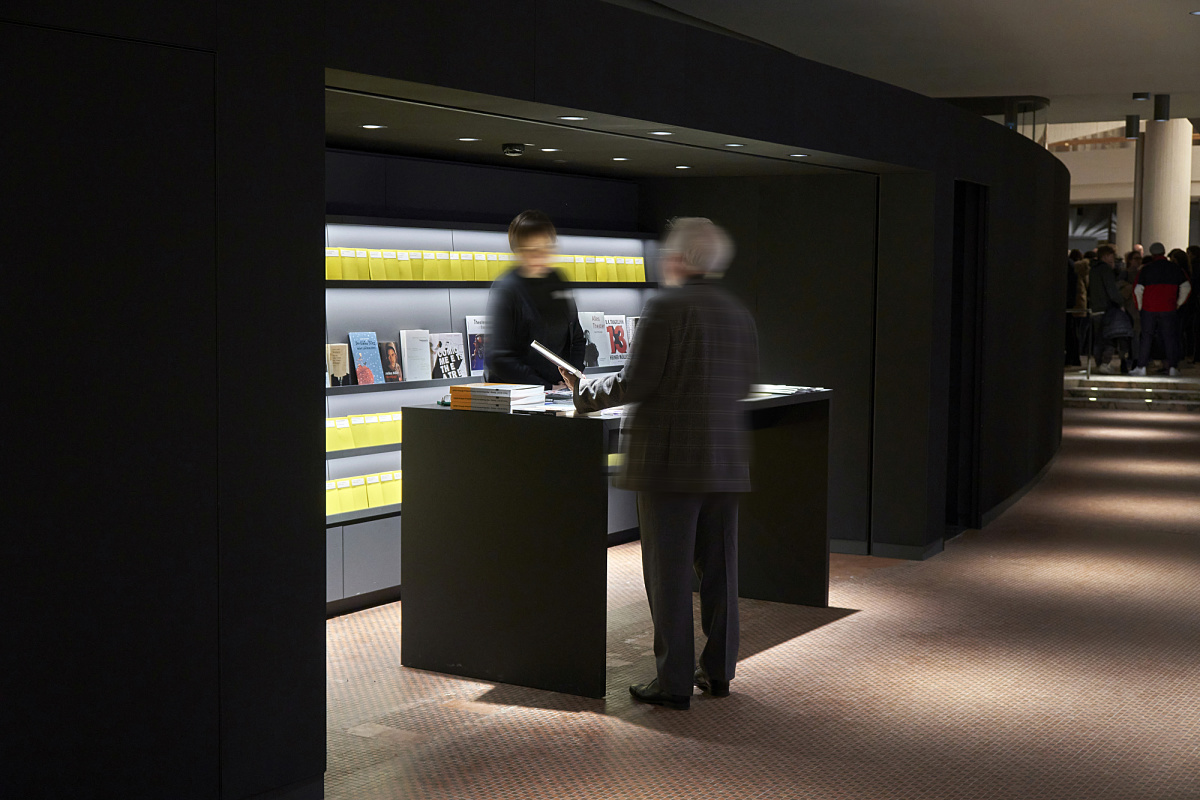 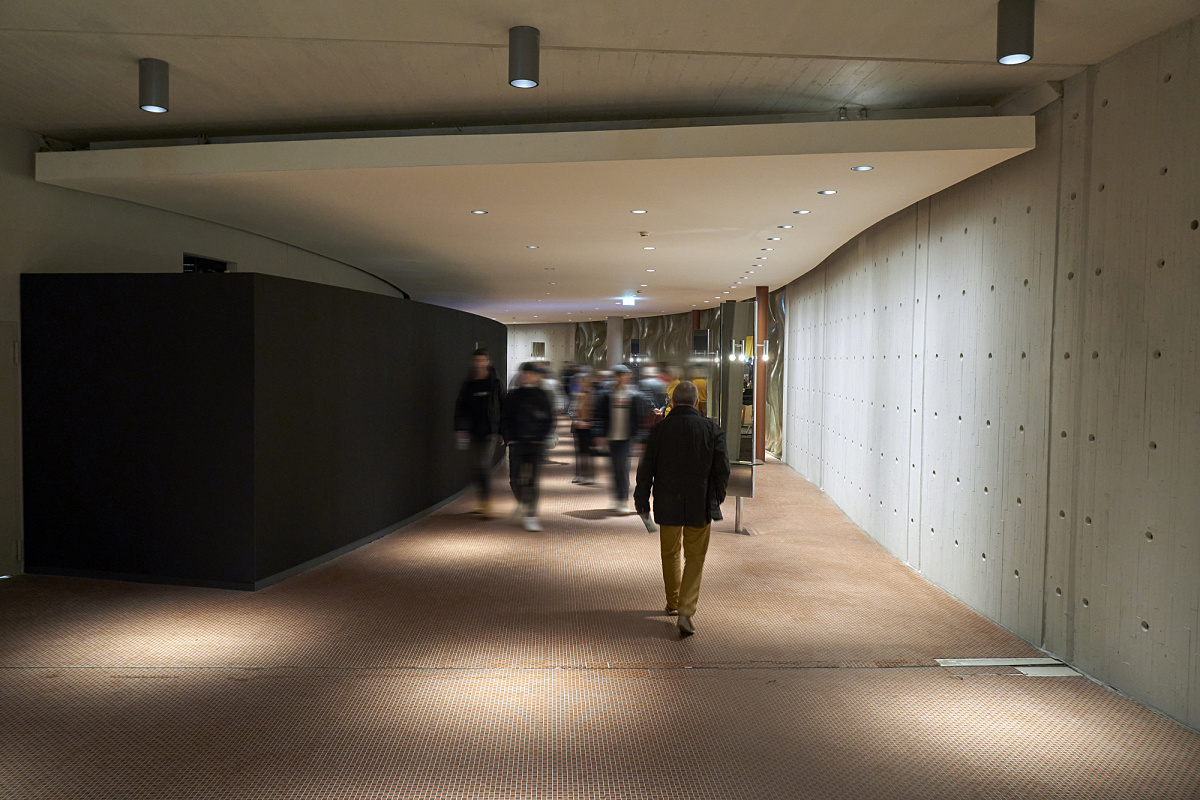 All relighting implemented LED lighting tools with a warm white light color of 3000K. In addition, no reflections on the fenestration interfere with the view from inside to outside into the urban space or the garden to the rear of the building. For this purpose, cylindrical LED surface-mounted luminaires (24W LED with DALI control) were installed along the inside glass facade of the foyer featuring a black anti-glare cone and especially narrow beam angles, made possible via the 'ERCO individual' service. 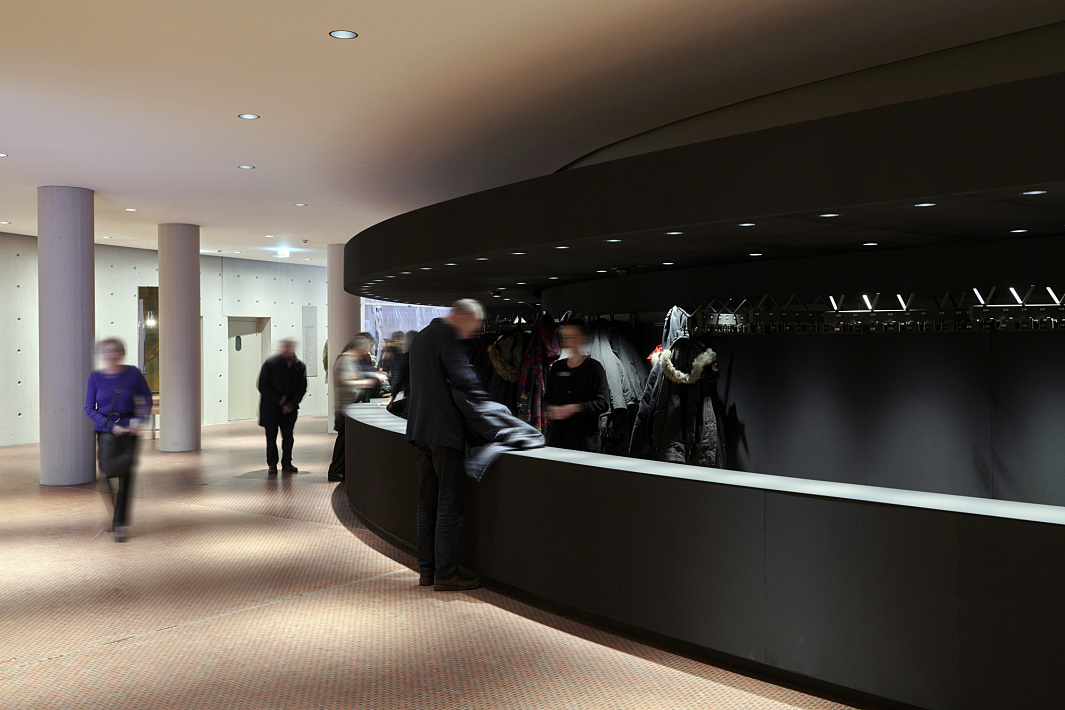 The new cloakrooms were designed by ingenhoven architects entirely in black, with black walls, ceilings and fixtures. Recessed downlights (DALI control, 10W LED) developed via the 'ERCO individual' service create optimum lighting in these 'black boxes': with wide light distribution and black anti-glare cones they ideally illuminate the cloakroom garments and create diffuse, glare-free light on the faces of visitors and employees. 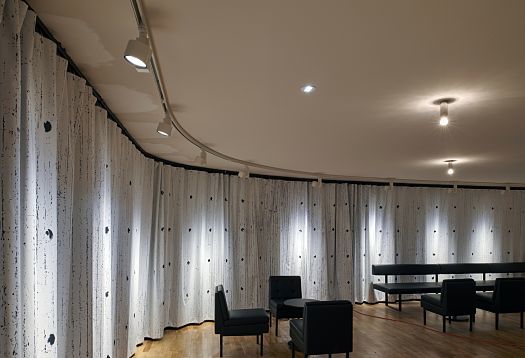 Parscan spotlights (DALI control, 24W LED) installed on a curved track illuminate the elaborate gold mosaic above the entrance to the foyer. The luminaire housing was modified with a special color via the 'ERCO individual' service. 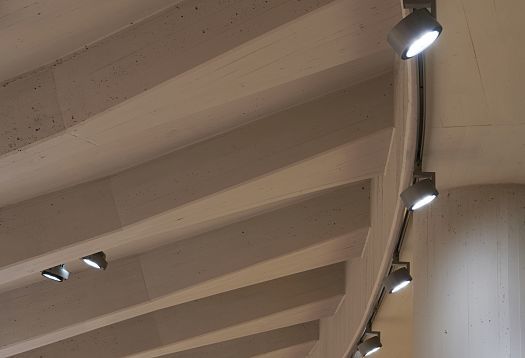 In the walkway connecting the new entrance area with the large and prestigious foyer, the existing lighting concept was optimized with LED recessed luminaires (24W LED, DALI control): "We left the position of the downlights more or less as specified in the original concept from 1970," says lighting designer Clemens Tropp.

"Using the new luminaires with spot distribution developed together with the 'ERCO individual' team, we deliberately created islands of light that set highlights on the floor and also bring out the materiality of the tile mosaics more emphatically."

New wallwashers with adjustable light emission optimally display the elaborately restored exposed concrete walls of the walkway. All the lighting in the foyer upgraded to energy-saving, long-life and maintenance-free LED lighting tools is flexibly controlled via DALI. "Various lighting scenes for the different uses of the foyer, for example reception, intermission and reading, have been pre-programmed and can be called up as required," explains lighting designer Clemens Tropp. 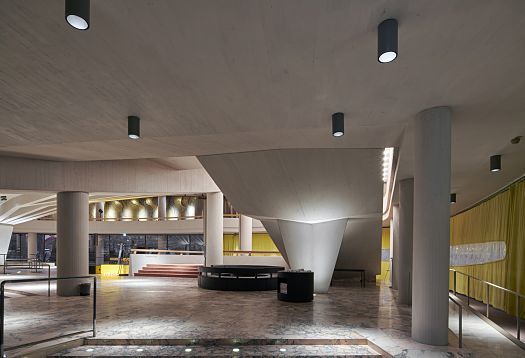 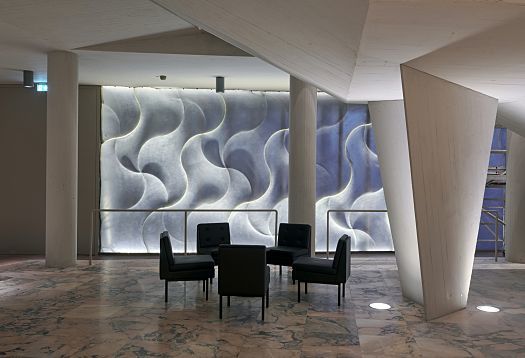 Displayed as a highlight of the architecture: the central support of the large foyer

Bernhard Pfau designed the large foyer around a massive, downwardly tapering column that supports a total of 23 radially running reinforced concrete beams up to 15 meters long. As part of the refurbishment project this essential architectural element was illuminated in a particularly spectacular way. Tesis ground-recessed luminaires were modified so that they could be installed in the existing positions around the support. They illuminate the sculptural support and the ribbed structure of the ceiling soffit with a precisely defined progression from bottom to top and from center to the outside. 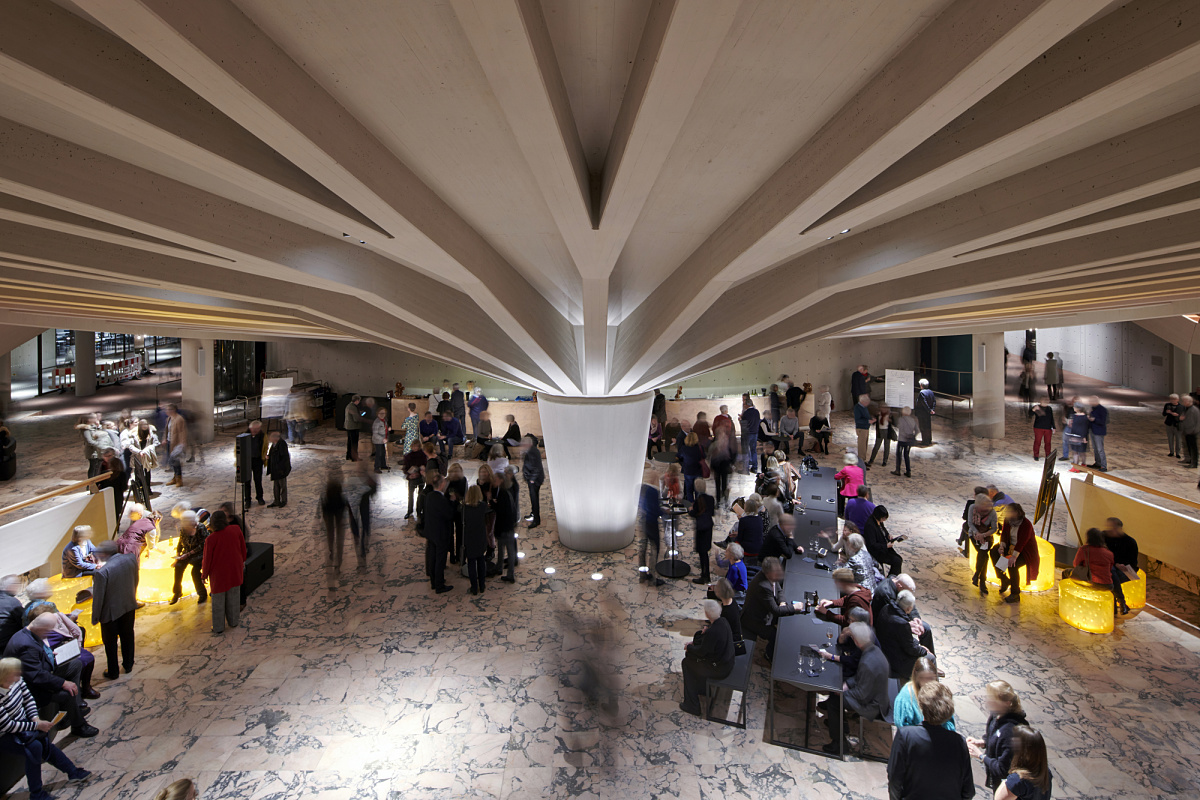 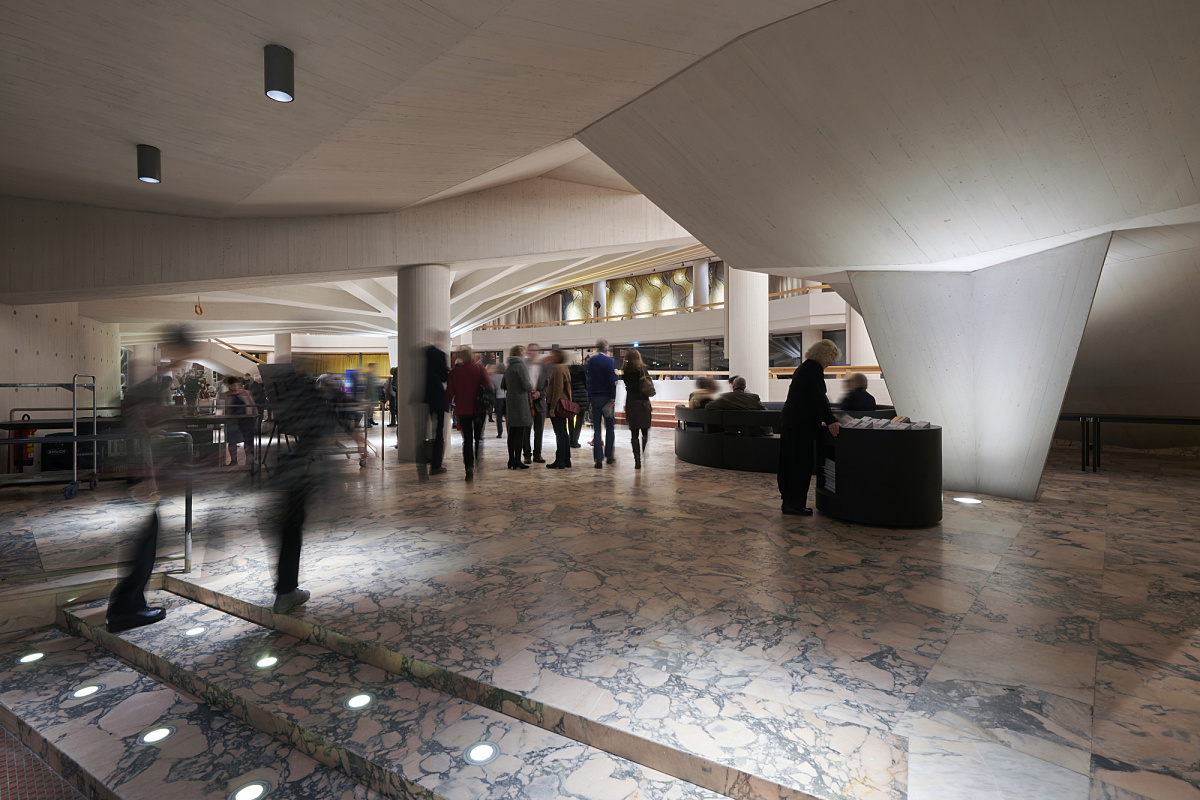 Gimbal surface-mounted luminaires (DALI control, 2x38W LED), also modified as part of the 'ERCO individual' service, were installed in pairs between the beams of the ribbed concrete ceiling; the luminaires have cardanic mechanisms for precise alignment of the light beams.

"This sophisticated custom lighting developed in close cooperation between us, the architects and ERCO lighting specialists creates a fantastic lighting effect," says an enthusiastic Clemens Tropp.

"The concrete beams of the ceiling actually appear to organically grow out of the central support, which now gives the space the grand gesture that Bernhard Pfau intended. This form of lighting also minimizes the innate heaviness of the massive structure." 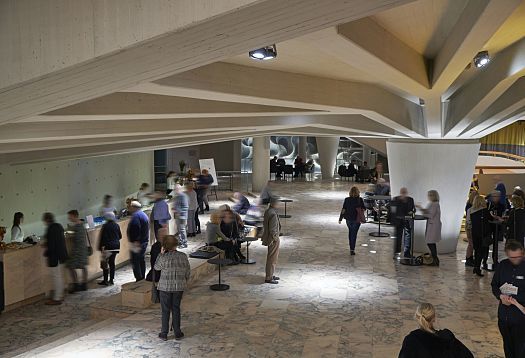 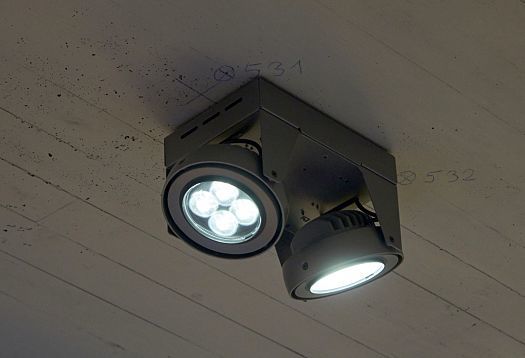 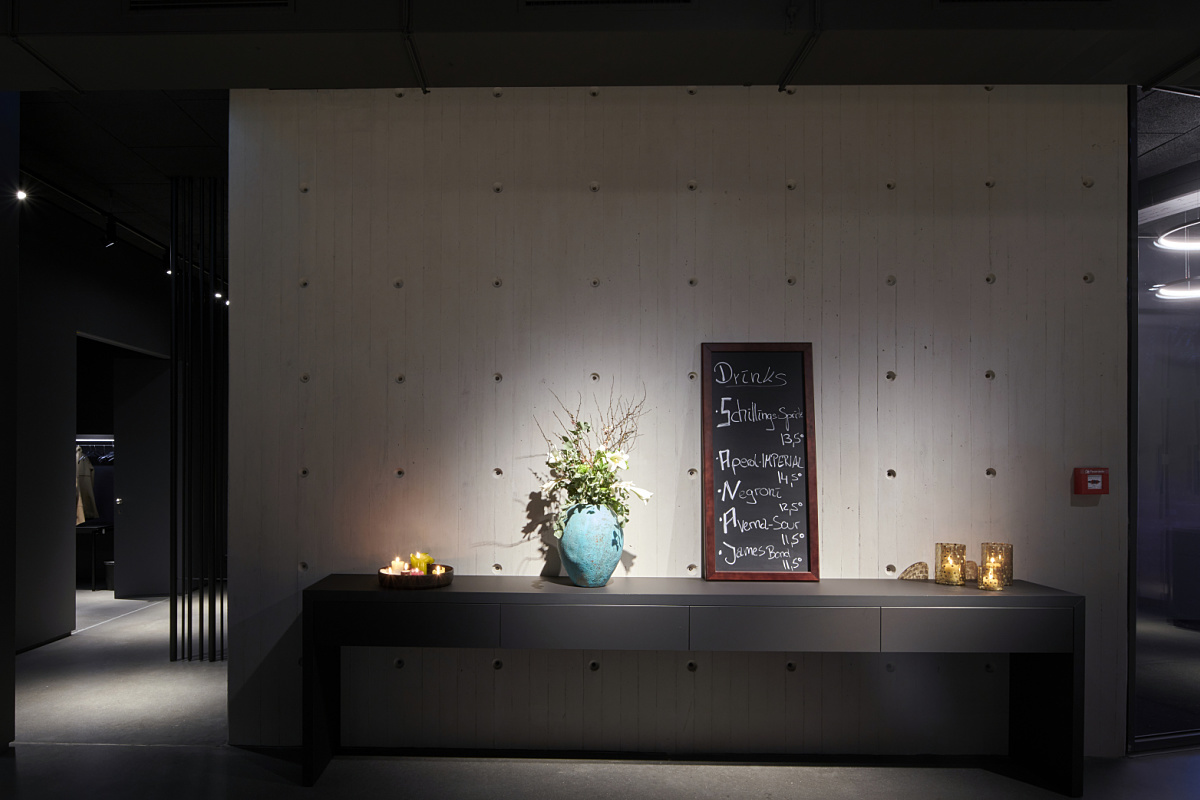 In the newly designed restaurant of the Schauspielhaus, Optec spotlights for track were installed along the window front. Starpoint pendant luminaires with flood Spherolit lenses illuminate the tables and counter. 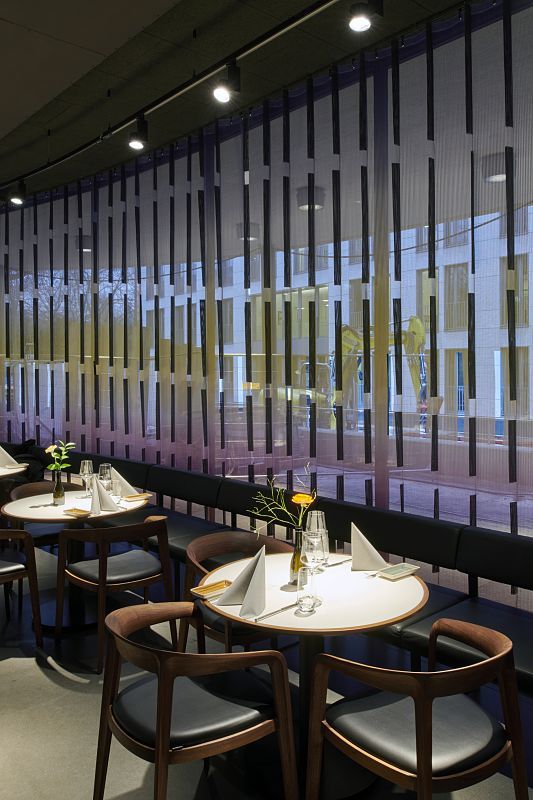 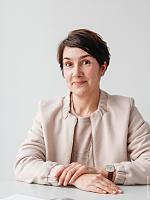 Kristina Raderschad has run an editorial office in Cologne since 2005. A qualified interior designer (Dipl.-Ing.), her articles, reports and interviews on architecture and design are published worldwide—in magazines such as AD Architectural Digest, ATRIUM, ELLE DECORATION, HÄUSER, AIT or WALLPAPER*.