The headquarters of the Swiss property company SPG in Geneva gained a new "second skin" of light and vertical offset glass lamellae as part of an extensive refurbishment. During the day these shade the building and create high visual comfort and a good indoor climate for the workstations. Illuminated with specially developed ERCO LED facade luminaires, the glass shell lends the building its highly unusual and prestigious character at night within the peripheral urban context.

Improvements to the quality of the workplaces was a central factor of the refurbishment project for the office building of the Swiss property company SPG Société Privée de Gérance on the outskirts of Geneva that was built in the 1970s and consists of eight floors. Giovanni Vaccarini Architects replaced the old glass facade with new triple-pane glazing and also added a "second skin" consisting of almost 2,900 vertically aligned glass lamellae printed with grids of squares. This envelopes the office block in a type of haze of glass that lends the building contours a blurred, indistinct quality and protects the interior from inquisitive views from the outside. The applied glass lamellae function during the day as solar protection. They provide shadow for the offices, ensuring high visual comfort at the workstations as well as the good energy efficiency of the building via a controlled indoor climate. The building however still maintains a certain level of porosity – and views from the interior into the picturesque surroundings, the mountains and Lake Geneva are still possible. The new glass facade provides the building with an unmistakable, elegant and representative character. During nocturnal hours the contours of the building gain a blurred appearance behind the discreetly illuminated, transparent shell and the edge of the building appears to upwardly dissolve. 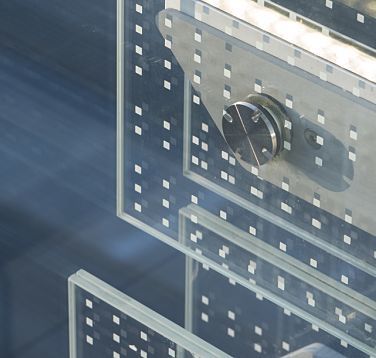 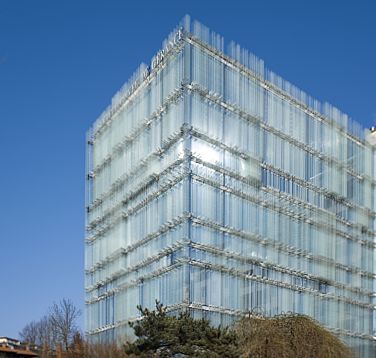 Light characterises the nocturnal image of the building

To realise the special effect of the facade at night (the project's lighting designer Simon Simos called it "the nocturnal signature of the building"), lighting designers and architects worked hand-in-hand from the very beginning. ERCO, as a dependable partner in the area of LED lighting tools for sophisticated architecture, was brought into the project during its early design phase. The lighting engineers from ERCO developed innovative custom outdoor luminaires for the new glass facade of the SPG headquarters. The light effect and the interplay of the facade luminaires with the printed glass lamellae was tested on-site using a model with a size of several metres. A total of 290 LED facade luminaires were ultimately installed on three levels within the facade that covers eight floors. The luminaires, concealed from view, are mounted in the gap between the glass lamellae with a width of only 45 mm in some places. The reason: "The luminaires should not be visible for observers but only their light effect," explained Simon Simos. Possible miniaturisation thanks to LED technology was exploited to its maximum when designing the lighting tools. ERCO ultimately supplied two variants of a high lumen-output and extremely narrow outdoor luminaire with a milled aluminium housing and IP67 protection. Based on a catalogue product, variants with lengths of both 20 cm and 30 cm were developed with six (nine) LEDs configured in series. These two variants correspond to the dimensions of the glass lamellae that vary in terms of depth, height and intermediate spacing. The housing colour of the luminaires was also modified to match the silver-anodised fixing brackets of the lamellae. Mounting of the facade luminaires proved to be quick and simple thanks to snap-fit clips. A narrow spot beam characteristic generates narrow grazing light that slightly laterally impacts onto the glass lamellae printed with small white squares. These reflect the light to create the almost unreal effect of the facade at night. As Simon Simos explains: "An optical illusion is created according to the angle of observation, a form of fuzziness. The building seems to dematerialise at dusk." 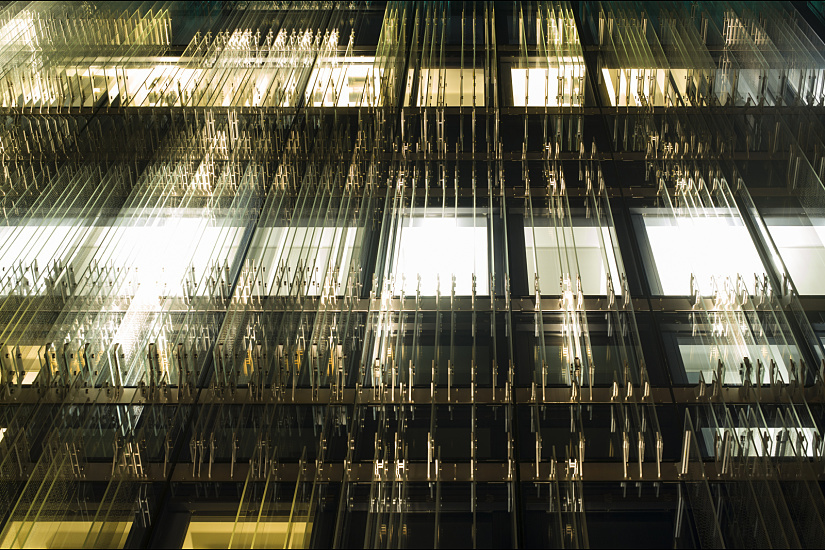 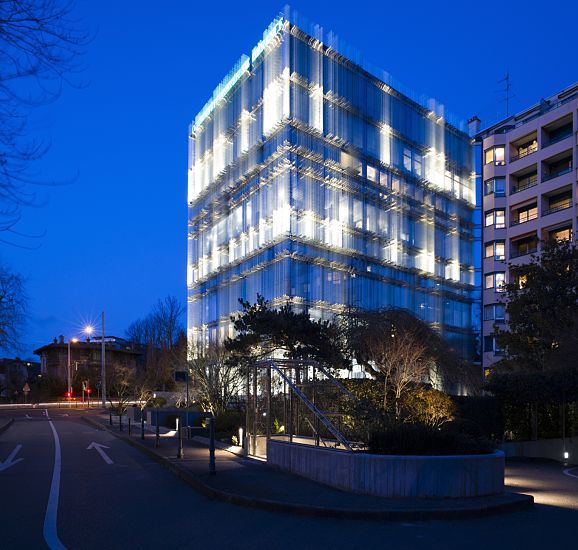 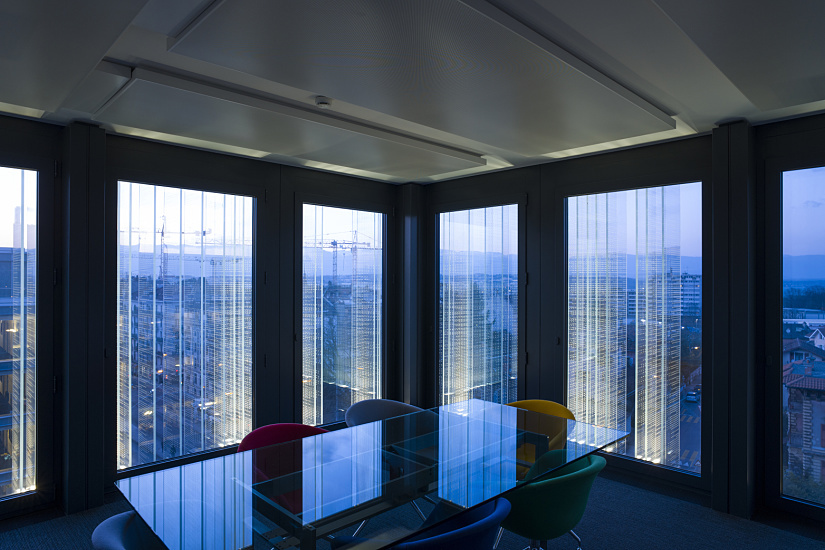