Once an imposing residence of the royal family during the 14th Century, the Gyeongbokgung Palace, located in the heart of Seoul, is an architectural pagoda masterpiece. It spans over an area of 400,000 m2, and embodies centuries of Korean history and tradition. Now a monumental historical site and tourist attraction that draws millions of visitors from around the world. ERCO Light creates a magical atmosphere that enhances the architectural features of the various buildings during the night.

The initial construction of the Palace dates back to as early as 1395. After suffering major destruction as a result of various wars and conflicts, the complex was rebuilt and refurbished in 1868. However, during the Japanese colonial period (1910-1945), it was further damaged and partially demolished. It was not until 1990 that the modern-day Gyeongbokgung Palace, with its current array of residences, was reconstructed to its original form. 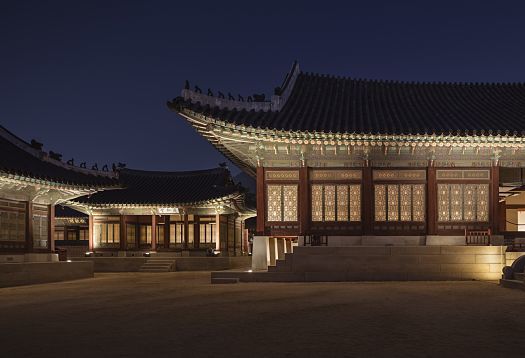 The various buildings are atmospherically illuminated in the dark with a focus on the special architectural features. 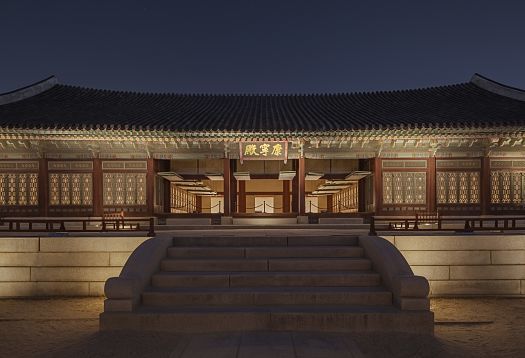 Gangnyeongjeon is where the king found his nocturnal rest. Following the Japanese invasion and a fire, the main residential building was meticulously reconstructed from 1994 onwards to achieve its present form.

A visit to the Palace is a stylistic time-travelling journey back to 14th century Korea and its architecture. The residences within the Palace are ideal portrayals of the pagoda style, a traditional Korean style of architecture—characterized by striking, multi-storey buildings with individual levels separated from one another by projecting cornices. The buildings are adorned with curved roofs, many of which are colorfully and richly detailed. Traditionally, the pagodas served to house the remains of particularly enlightened Buddhist monks Tesis ground-recessed luminaires illuminate the entrances to the palaces for visitors. 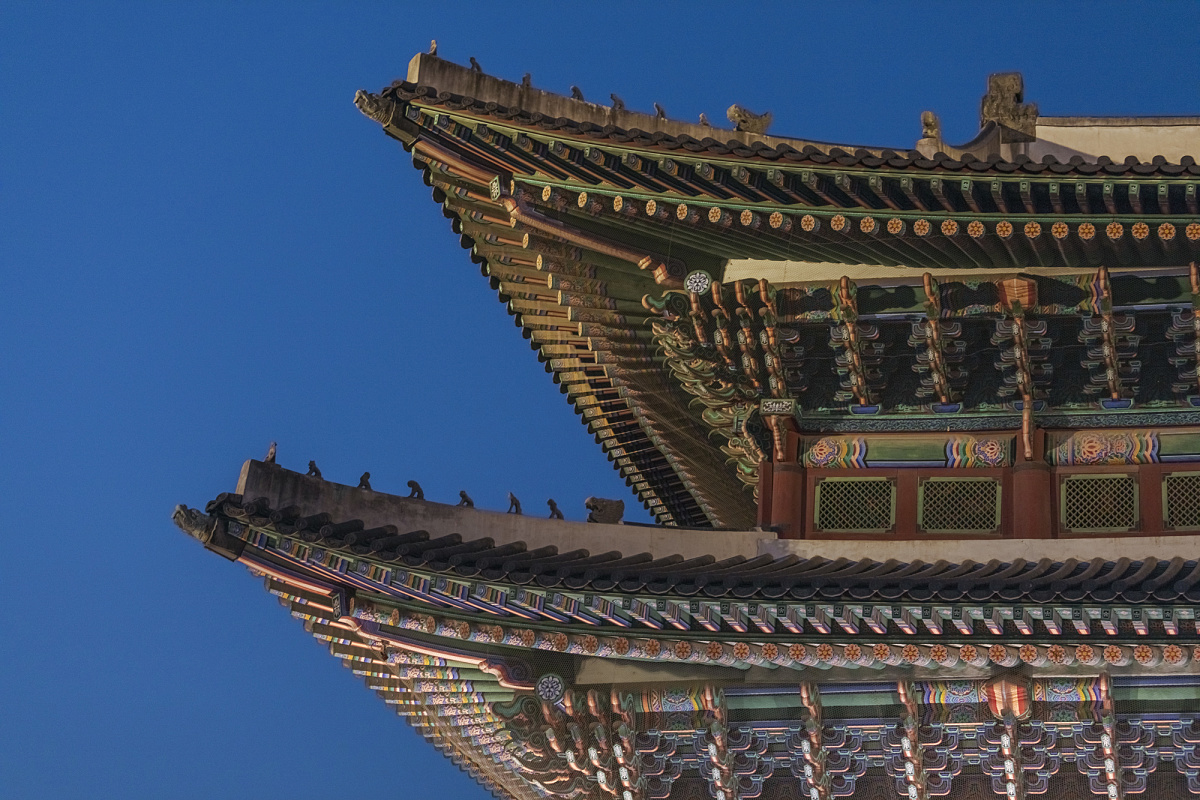 A perfect reflection of the pagoda style: the traditional Korean building style consists of multi-level buildings whose individual storeys are separated from each other by projecting cornices.

Journey to the 14th century—designed with light

bitzro & partners is a leading firm and practitioner of lighting design in South Korea. The designers have directed and engaged in numerous prominent lighting design ventures and projects throughout the country and all around the world. Behind its concept for the Gyeongbokgung Palace, bitzro & partners states that its core aim is to take visitors on a journey through time with light. “We now live in the 21st century, but the nights we see are exactly the same as what people saw 500 years ago,” says Kiyoung Ko, Founder, CEO and Design Principal of bitzro & partners. “The idea was to plan the lighting so that people who are visiting the Palace today could experience a similar feeling to those who were visiting and living there half a millennium ago. What did the King see and feel as he walked around his palace under the starry night sky? How did the women of the Palace feel as they strolled through the gardens? What did the reflection of the Palace on water look like under the moonlight? We wanted to make that experience as authentic and comprehensible as possible for the visitors.” 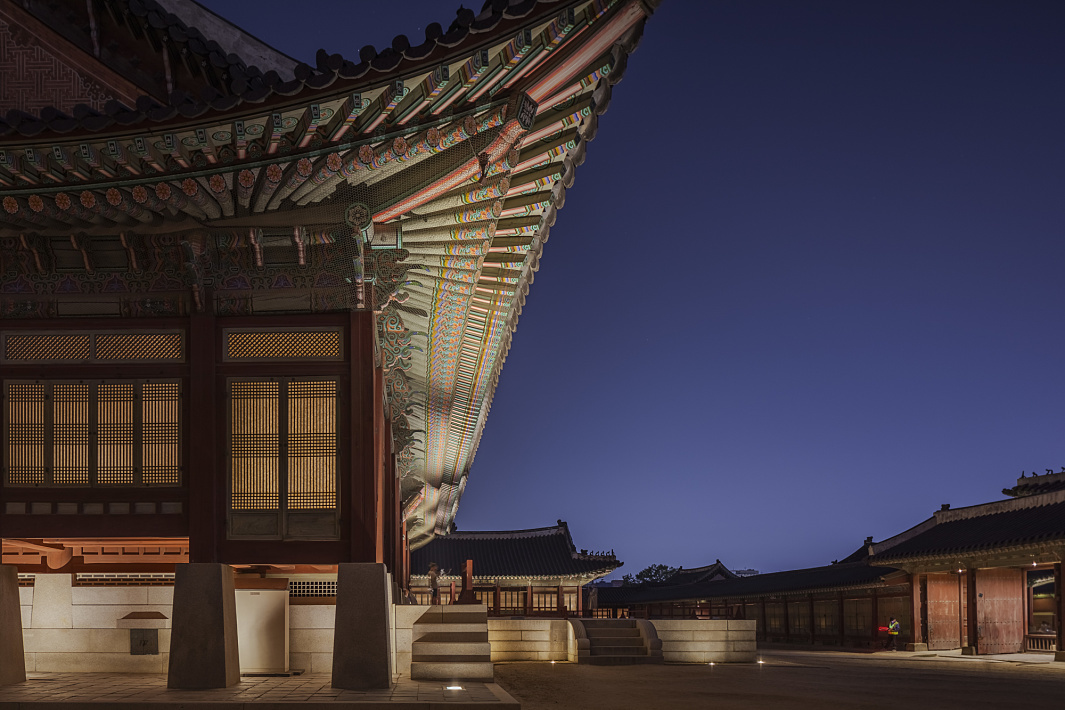 Light traces the details of the pagoda architecture. Thanks to the compact housing of the Tesis in-ground luminaires, the light source remains almost completely concealed.

Historically, traditional Korean lighting usually involved kerosene lamps, which exhibit a warm tone of light that would softly permeate through the hanji windows to shine and create a mystical aura when viewed from the outside. As such, by predominantly relying on indirect illumination consisting of warm white 3,000K light, bitzro & partners aims to recreate this atmosphere at the Gyeongbokgung Palace. 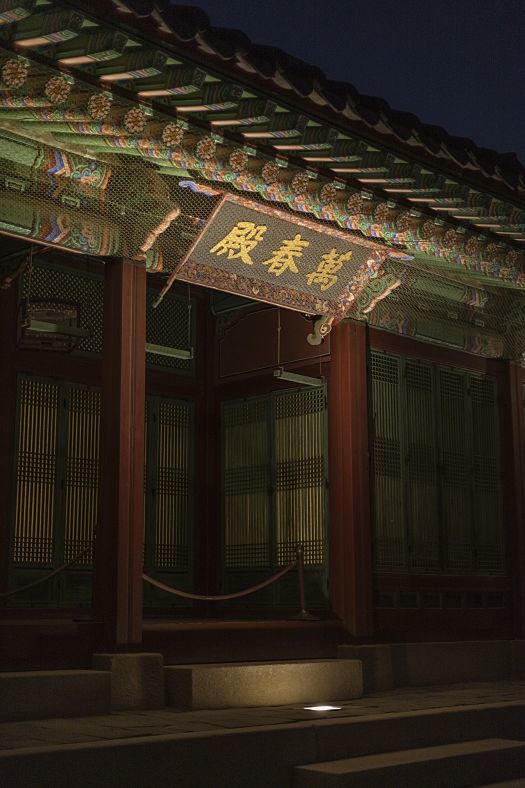 Furthermore, the designers purposely decided not to completely illuminate the buildings in the dark, instead opting to highlight specific architectural features, such as roof cornices, columns, and ornamental details. “To perfect the aura that we want to create at the Palace, we had to be sure that the lighting is precise and controllable, and that it is free of spill light,” says Kiyoung Ko. “Thanks to ERCO, we were able to achieve this requirement.”

Tesis ground-recessed luminaires illuminate the curved cornice of the roof and succinctly display the colored ornaments and details. 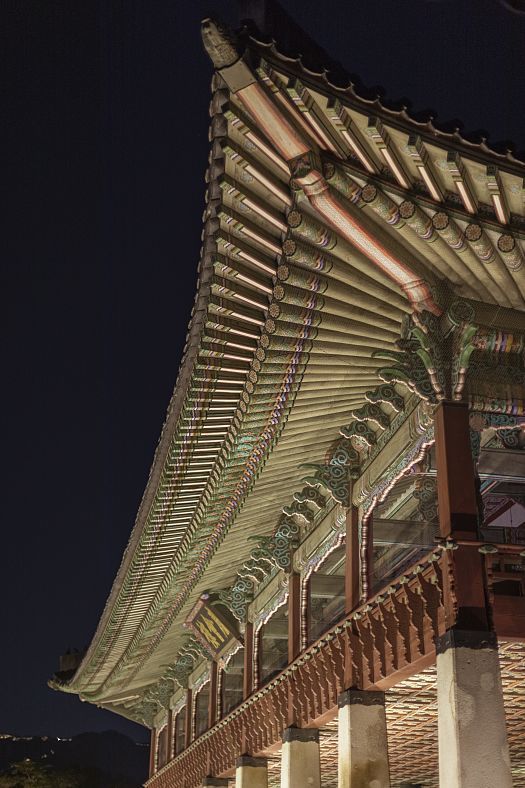 The warm white light with 3,000K strikingly emphasizes the decorations on the cornices.

Displaying Dimension and Magnitude through Light

In the middle of a spacious courtyard at the heart of Gyeongbokgung Palace is the Geunjeongjeon Hall, a building designated as a national treasure by the government of South Korea. Arguably the most well-known complex in the Palace, known as the Main Throne Hall in English, was where the King issued official declarations, received foreign envoys, and carried out various royal activities and ceremonies. The primarily wooden structure rests on a two-tiered stone platform, has detailed balustrades, and is decorated with various smaller sculptures of mythical creatures such as dragons and phoenixes. The Hall is illuminated from a large distance with Kona projectors and precise 6° narrow spot distribution, utilizing the high luminous flux of the 42W LED module that makes the Kona ideal to illuminate from a distance. Given that the Hall is an officially designated national treasure of huge significance for the Korean heritage, it is illuminated from a distance of about 70m with high precision through a total of ten projectors mounted on two masts. 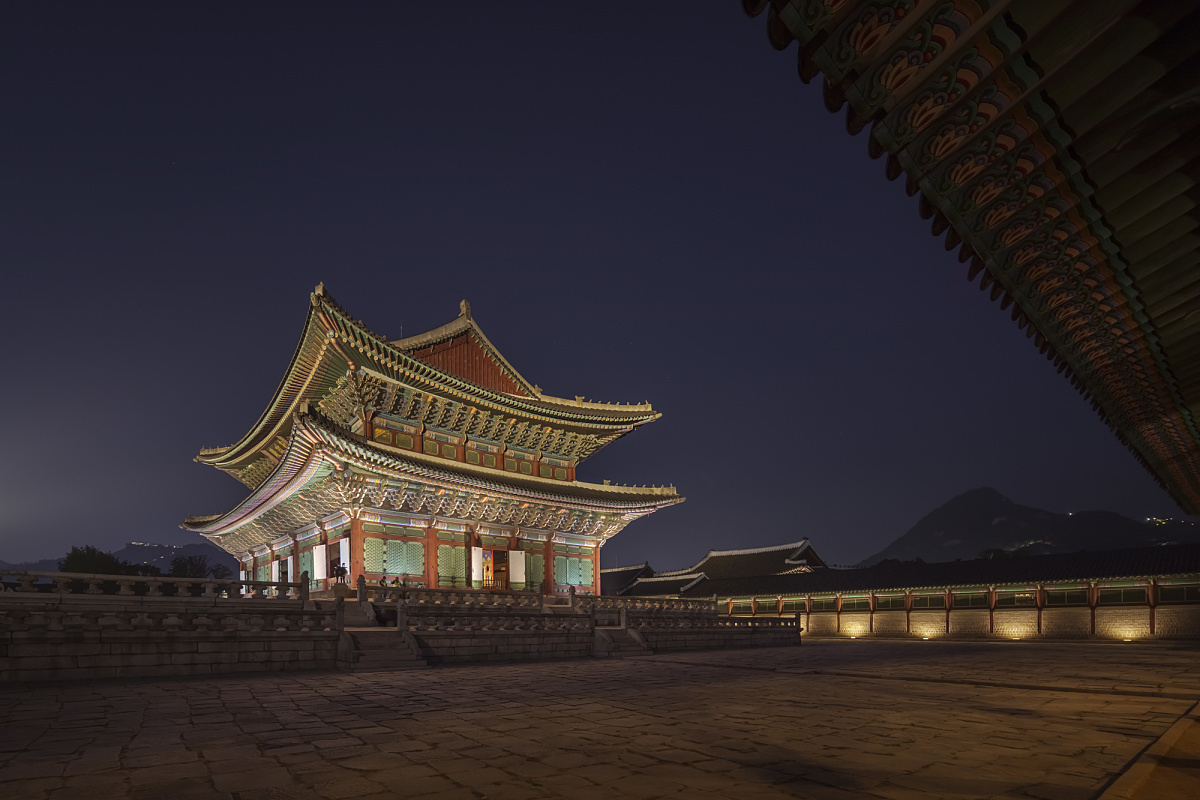 The king granted audiences and received foreign guests at the Geunjeongeon. At night, the palace radiates thanks to high-output Kona projectors with precise narrow spot distribution. 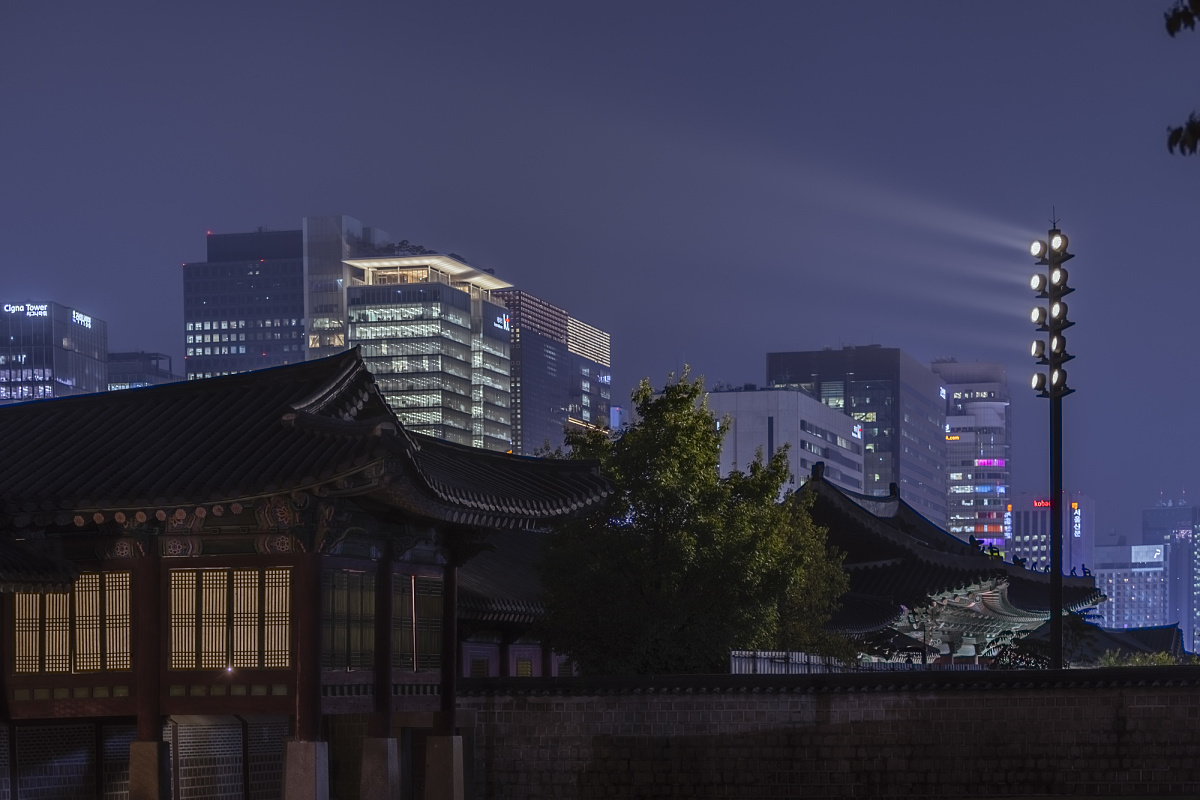 The Geunjeongeon main throne room is illuminated with high precision from a distance of about 70m by Kona projectors mounted on masts.

Wallwashing for orientation and architectural details

The Gyeonghoeru Pavilion, a single-storey building mainly made of stone and timber, is situated on a small island in an artificially created lake within the Palace. Accessible via three bridges, the Pavilion was a site of various festivities and state banquets. The columns are positioned to represent the ancient dualist philosophy of the yin and yang. To illuminate this structure, bitzro & partners uses square Tesis ground-recessed luminaires to perform the uniform wallwashing technique, which highlights the colored ornaments on the cornice and traces the upward curving of the roof on the sides of the Pavilion. “An advantage of the luminaires is that they could be installed rather inconspicuously in the ground and on the stones,” says Kiyoung Ko. “Visitors are guided solely by the light, which reveals the refined architectural details of the Pavilion. The luminaire itself is barely noticeable.” 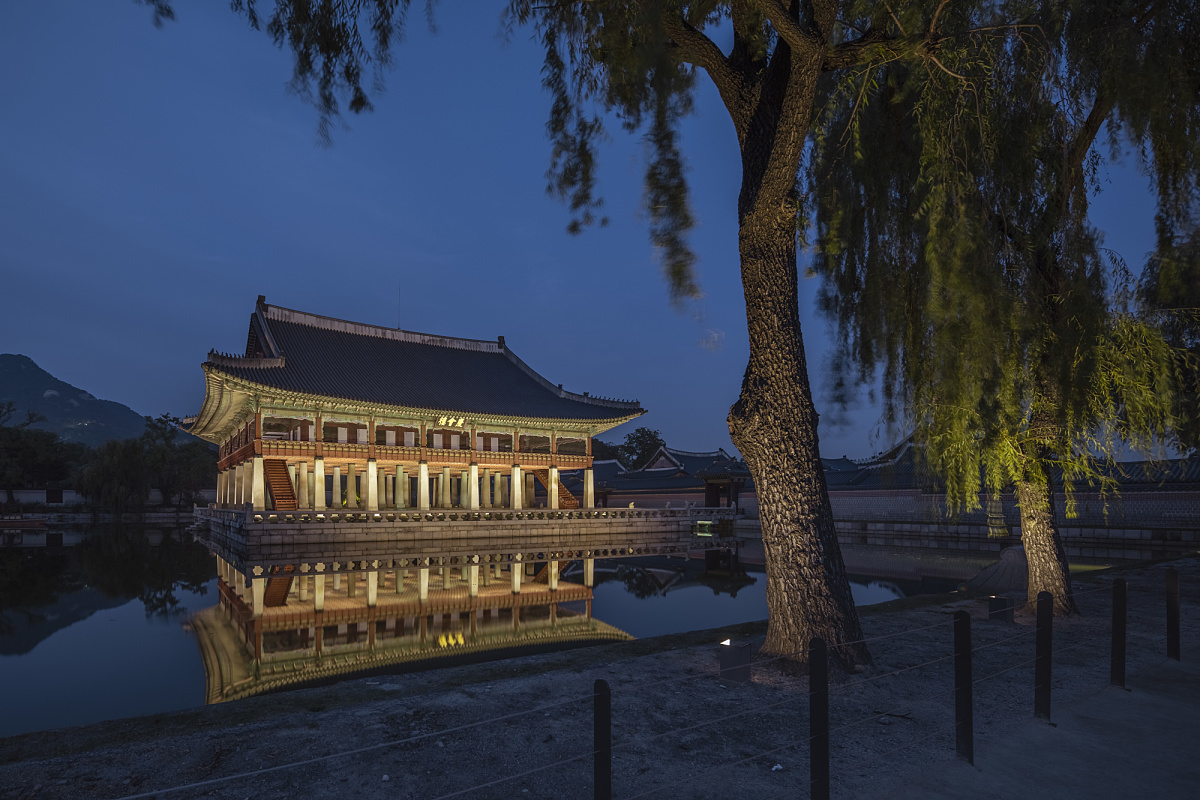 Gyeonghoeru Pavilion is situated on an island in the middle of an artificial lake. Festivals and state banquets were once held here. Gyeonghoeru Pavilion: the position of the columns represents the philosophy of yin & yang.

In order to meet the lighting concept and the level of architectural intricacy of the Palace, bitzro & partners used state of the art LED technology: important was a high color rendering (CRI>92) and reliable color consistency in order to illuminate and display the fine decorative details of the structures without distortion. Furthermore, in order to fulfil requirements pertaining to conservation, the designers chose to install low maintenance ERCO outdoor lighting tools. Even after 50,000 hours of operation, 90% of the LEDs retain more than 90% of their original luminous flux, with the failure rate of individual LEDs during this period being less than 0.1%. 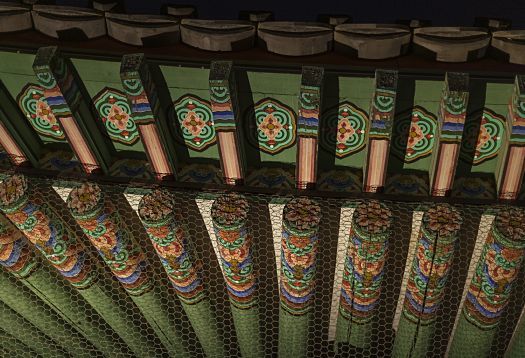 In order to accurately display the colors and decorative details, LEDs with high color rendering and reliable color consistency were specified. 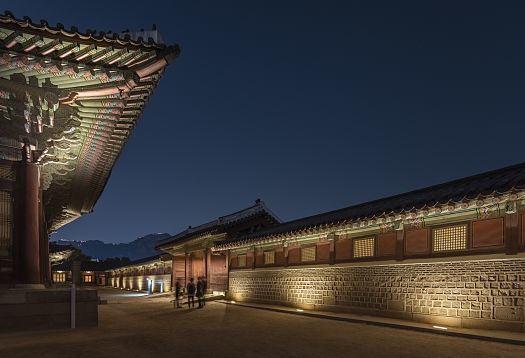 The light from Site linear grazing light wallwashers mounted in the ground effectively brings out the structure of the stone wall. This creates rich-contrast, structurally appealing effects with light and shadow.

By replacing the old lighting systems with new LED luminaires, about 80% energy could be saved. “The textures and the details of the wood and stone surfaces that the Palace had somewhat lost for a long time now once again perfectly come to the fore,” says Kiyoung Ko. “Thanks to the various high-precision beam angles that we utilized for our design at the Gyeongbokgung Palace, we were able to completely realize all of the details that our lighting project had hoped to achieve.”

The Gyeongbokgung Palace complex is not just a simple tourist attraction for visitors from around the world. With the new lighting concept, it is now also a prominent cultural landmark that simultaneously brings Korean history and tradition to life in a new light.