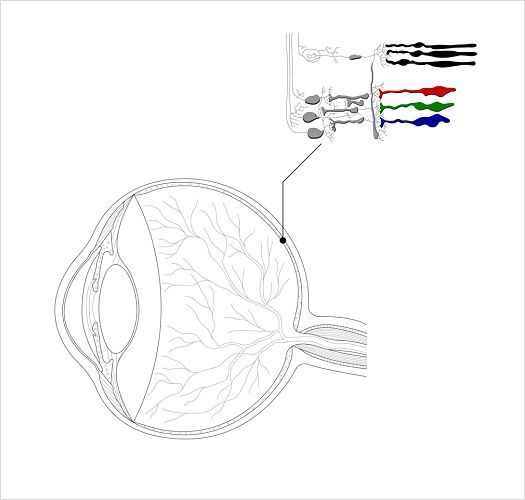 Receptors in the eye are sensory cells that respond to light stimuli and transmit signals via the nerves to the brain. Humans have three different types of light-sensitive receptors for visual and non-visual perception.

What are the types of receptors?

The human eye has three different types of light-sensitive receptors: rods, cones and photosensitive ganglion cells.
Rods and cones enable visual perception, i.e. vision. The light-sensitive rods let us see differences in brightness even at night
The special features of night vision are:

Cones on the other hand serve to perceive colours and require more light. In darkness, humans perceive no colours but only shades of grey. It is only with increasing luminance that the eye switches from night vision (scotopic vision) via twilight vision (mesopic vision) to coloured daytime vision (photopic vision) .
This distinguishes the cone system:

The photosensitive ganglion cells represent a special type of photoreceptor. They have only been analysed more closely since the 1990s. They are not used for seeing like the other two receptors, but use brightness information to control e.g. the circadian rhythm, the "internal clock" of humans during the day and night. 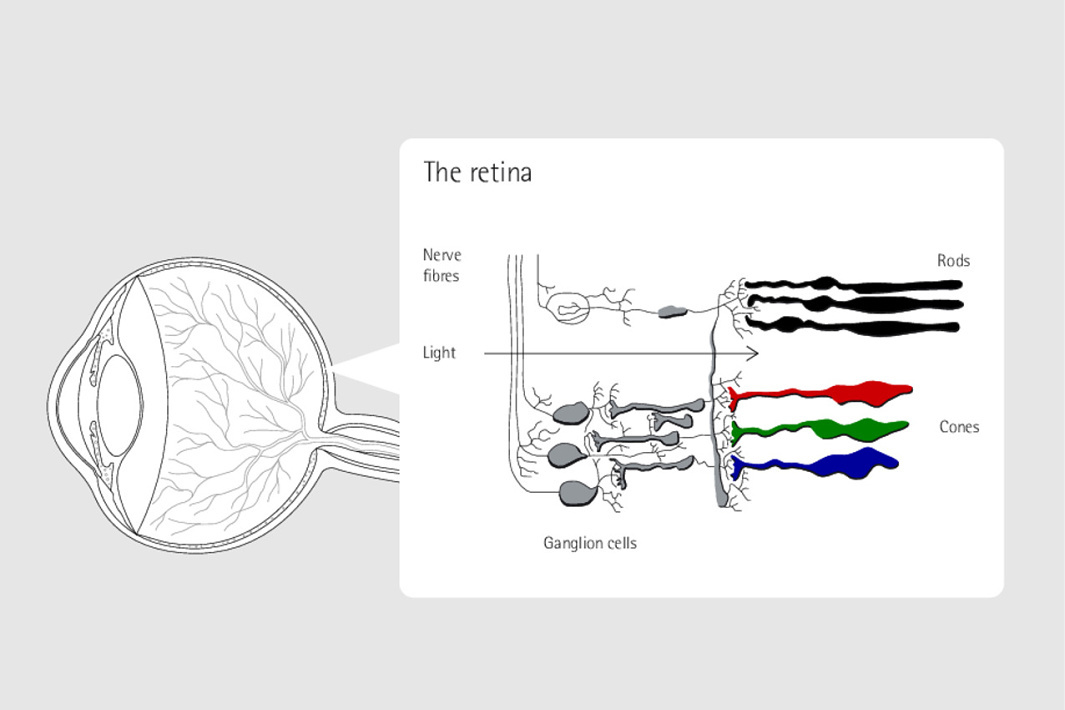 How are receptors arranged?

A closer look shows that the receptors in the retina are not arranged in a uniform grid. The spatial distribution of the cones and rods is not uniform. At one point, called the "blind spot", there are no receptors at all because this is where the bundled optic nerves enter the retina. Contrarily, there is also an area of particularly high receptor density known as the fovea, which is located at the focal point of the lens. This central area contains a highly concentrated number of cones. However, the density of cones decreases sharply towards the periphery. This is where the rods sit, which are completely absent in the fovea.

In contrast to rod vision, the entire field of vision is not perceived uniformly. The focus of perception is in its centre. However, the edge of the field of view is not completely without influence: if interesting phenomena are perceived there the gaze is involuntarily directed to this point, which is then imaged in the fovea to be perceived more precisely. An important reason for this shift in the direction of gaze is the presence of high luminance levels, in addition to movements that occur and noticeable colours or patterns, – people's gaze and attention can therefore be directed by light.

The photosensitive ganglion cells are distributed across the entire retina. However, these receptors react particularly sensitively in the lower area and towards the nose.

How many receptors does the eye have?

The retina's receptor layer has approximately 6 million cones and 120 million rods. The exact quantity varies from person to person.

People with too few or no rods in the retina suffer from night blindness. People who have no cones or non-functional cones are colour-blind.

Further topics on the human eye