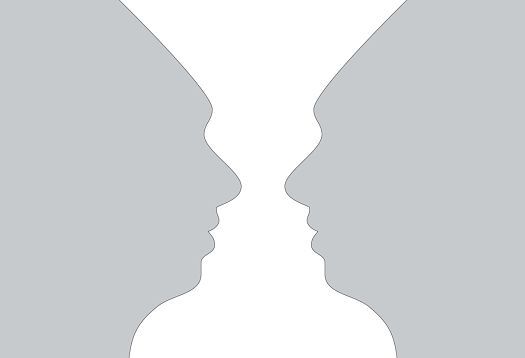 The term shape perception is understood as a theory that assumes that visually perceived structures do not result from single elements. The observer sees or records these structures in their entirety primarily as a shape, recognised by a law of shape and separated from its surroundings.

Overview of the topic shape perception

What are laws of shape?

To assign a property to a visually perceived object, it must first be recognised, i.e. distinguished from its surroundings. Laws are derived from the process of interpretation or analysis, according to which specific arrangements can be grouped into visually perceived figures or objects. The laws of shape are also of practical use to the lighting designer: each lighting installation consists of an arrangement of luminaires, be these on the ceiling, on the walls or within the space. However, such arrangements are not perceived directly but organised into figures according to the rules of shape perception. The surrounding architecture and lighting effects of the luminaires create further patterns integrated into the perception.

What is the law of proximity? 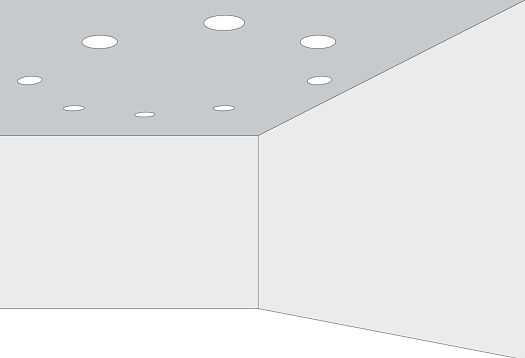 Shapes perceived as closed must not mandatorily have a continuous contour. Elements arranged near to each other can be grouped together via shape perception according to the 'law of proximity' to form a single figure.

In the example shown above, the observer therefore first sees a circle and only afterwards sees a ring-shaped arrangement of points. The organisation of the points is so strong that the imaginary connecting lines between the individual points are not on straight lines but on the circular line – the result being not a polygon but a perfect circle. 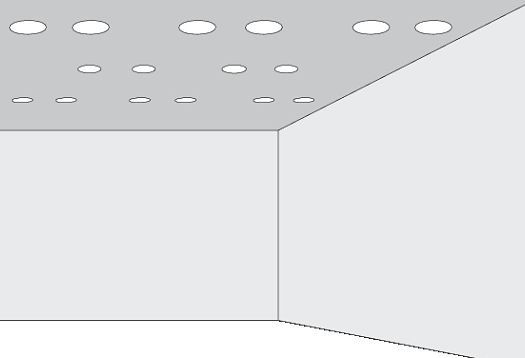 Luminaires are joined together to become pairs. 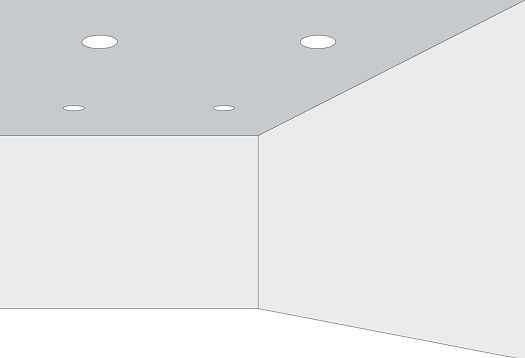 What is the law of symmetry? 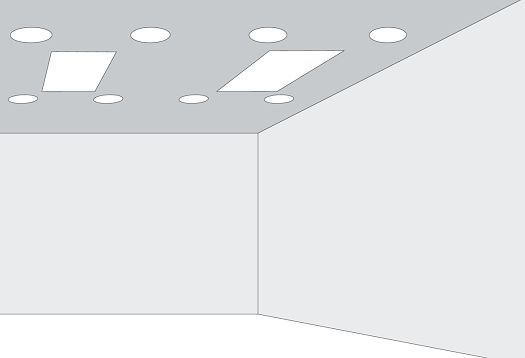 In shape perception, one criterion for group formation is symmetry. Particularly with mirror-symmetrical arrangements around a vertical axis, the mirrored shapes can each be combined into pairs. This effect is sometimes so strong that the grouping of adjacent shapes according to the law of proximity does not take place.

An example: The arrangement of two square shapes into four round shapes is reorganised into two groups of five according to the law of shape for symmetry.

What is the law of sameness? 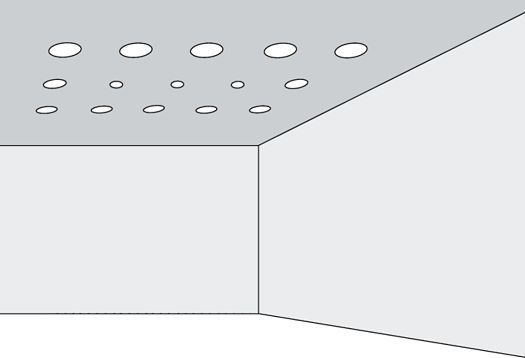 In addition to the spatial arrangement, the structure of the shapes themselves is also responsible for linking into groups. Thus in the example on the right, the shapes are not organised according to their proximity to each other or possible axial symmetry, but on the basis of identical shape.

This principle of sameness also applies when the shapes of a group are not identical but only similar. For example, circles of different sizes are perceived together. Rectangles and squares also sometimes belong to a group due to their similar shapes.

What is the law of enclosure? 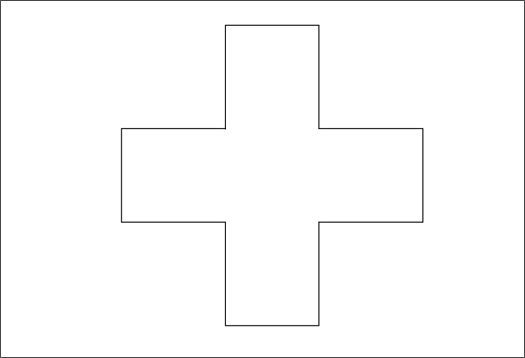 An essential principle of shape perception is the tendency to interpret closed shapes as a figure. Partly enclosed structures are also still perceived as a figure.

A closed shape is always found on the inside of the line that delineates it. This means that the shape-forming effect of the line only works in one direction. Usually this inner side is identical with the concave, enclosing side of a delineation.

This leads to the fact that even with open curves or angles, a shape effect takes place that makes a figure visible on the inside of the line, meaning in the partly enclosed area. If a plausible interpretation of the initial pattern occurs in this way, the effect of the inner side can be very strong.

Within an outline, complete enclosure is not necessary to group the objects within it. The suggestion of a closed shape is sufficient to feign a closed whole.

Experience and its resultant pre-expectation are sometimes so strong that missing parts of a shape are added or individual details are perceived as changed in order to modify the object to the expectation. Without a contour, perception of the shape can succeed here only on the basis of the shadow formation.

The experience makes it possible to recognise the overall shape due to essential details being made visible.

The principle also works with more complex depictions such as a cube. The edges of the figure are created in our brain according to the law of enclosure.

What is the law of the continuous line? 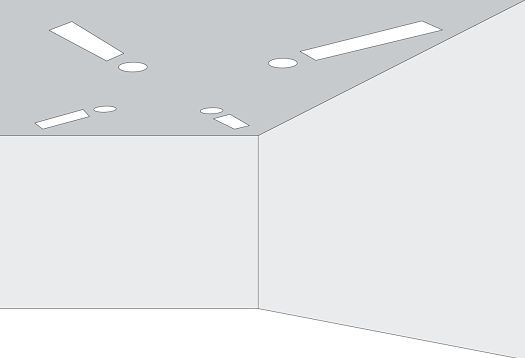 A fundamental law of shape perception is to see lines preferentially as uniform, continuous curves or straight lines. Interruptions, kinks and branches are therefore avoided. The tendency to perceive continuous lines is so strong that it can influence the overall interpretation of an image.

What is the law of good shape?

In the area of planar shapes, the law of the continuous line corresponds to the law of good shape or law of good continuation. Here, shapes are organised to result in the simplest, most orderly figures possible. 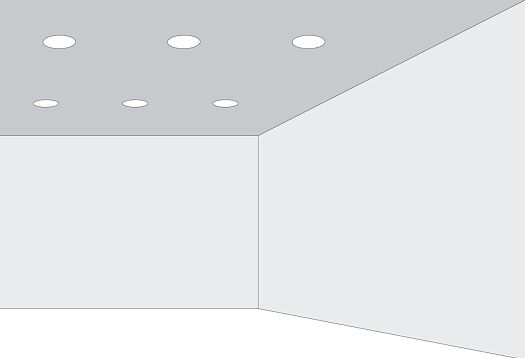 The arrangement of the points in the ceiling can be joined into two lines according to the law of good shape. 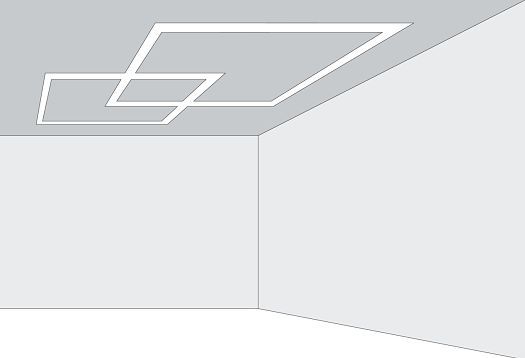 This arrangement is interpreted as two superimposed rectangles.

What is the law of equally wide shapes? 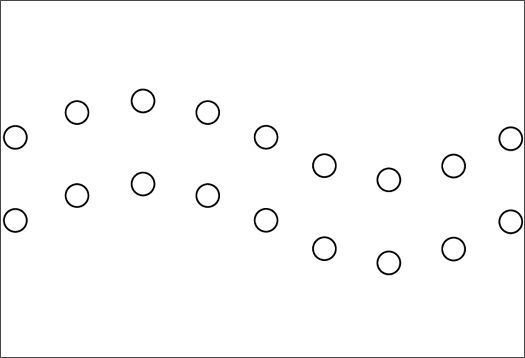 In the case of parallel, equally wide shapes there is no strict symmetry, but a clear organisational principle can be still recognised. This leads to preferential perception as a figure. In the example, the circles are interpreted as two parallel lines because of their identical behaviour.

Further topics on seeing and perceiving