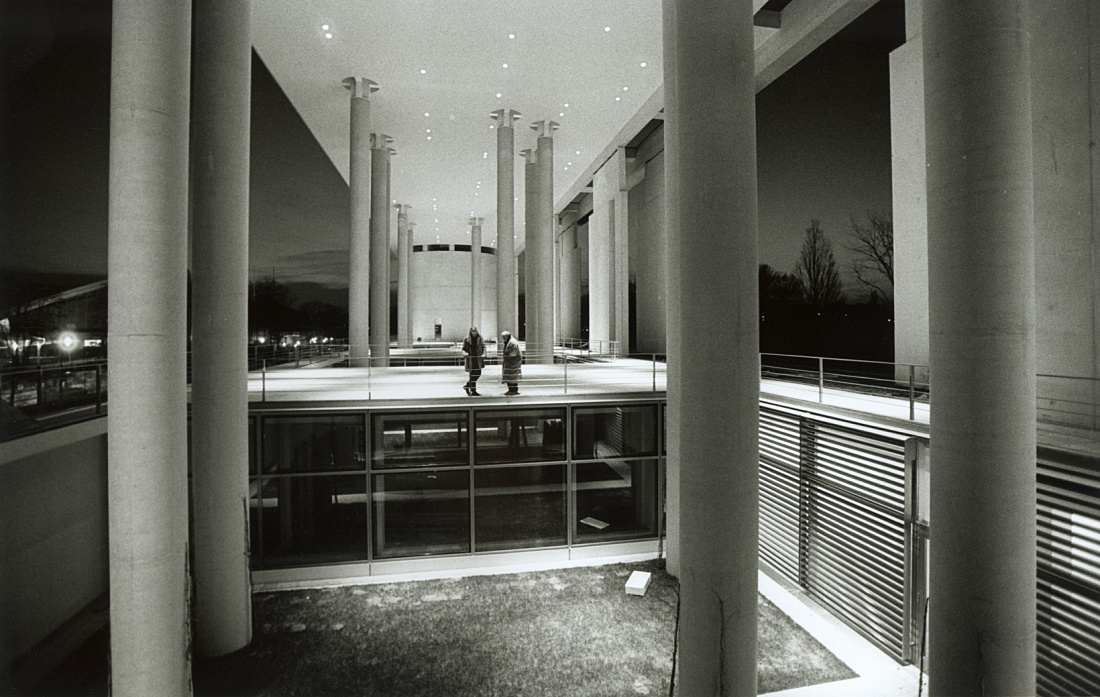 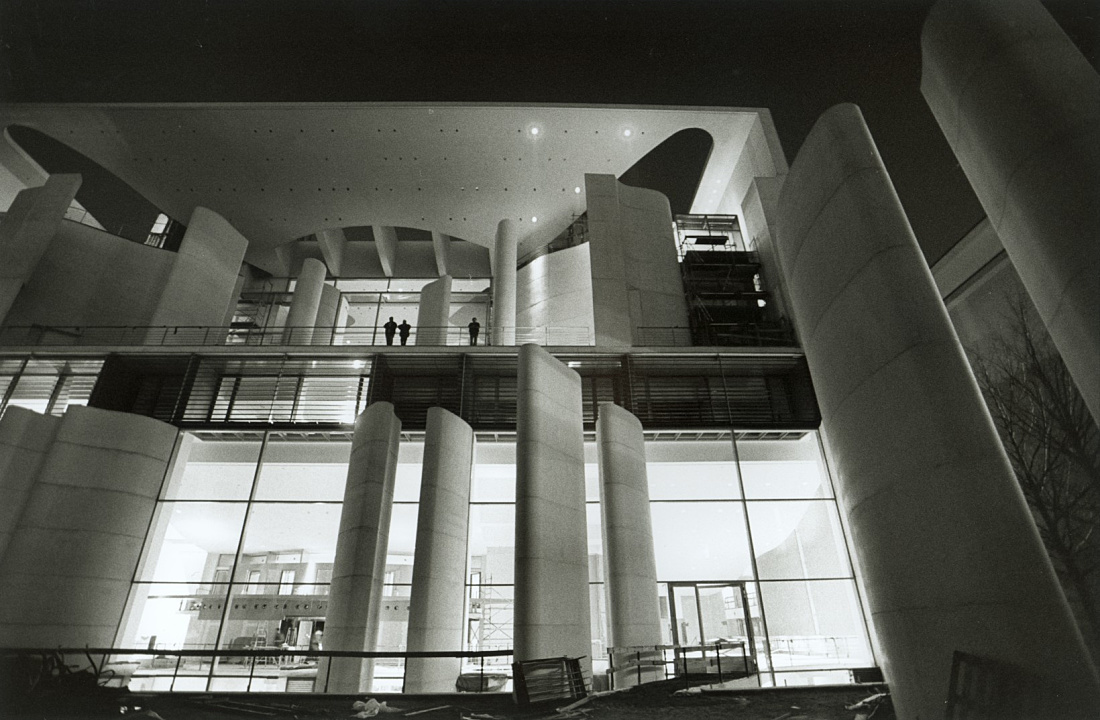 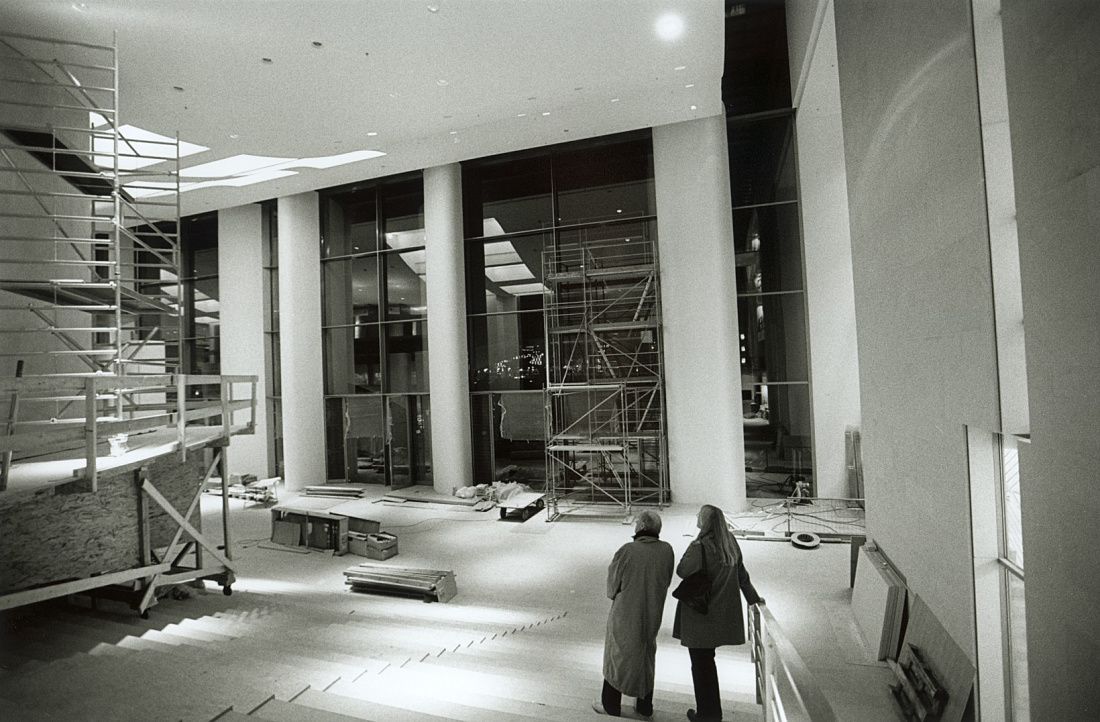 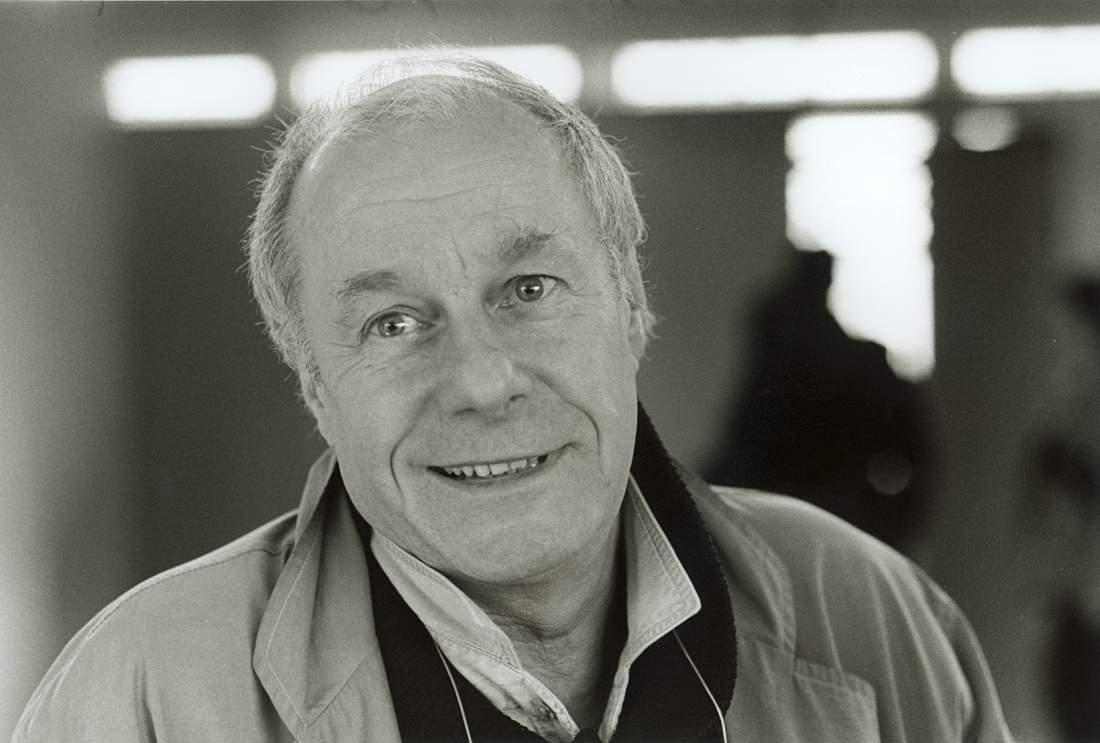 The Federal Chancellery in Berlin is not only an exciting and controversially discussed piece of architecture, but also an excellent example of the teamwork between architect, lighting designers and luminaire manufacturer - with the goal of achieving the perfect quality of light. 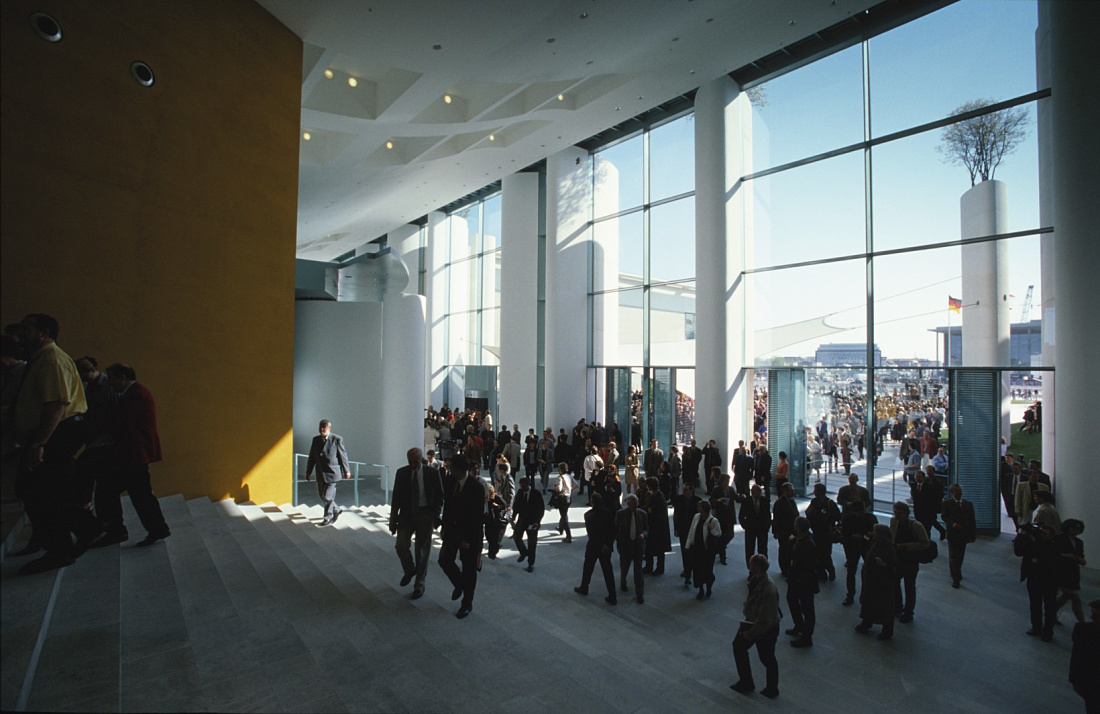 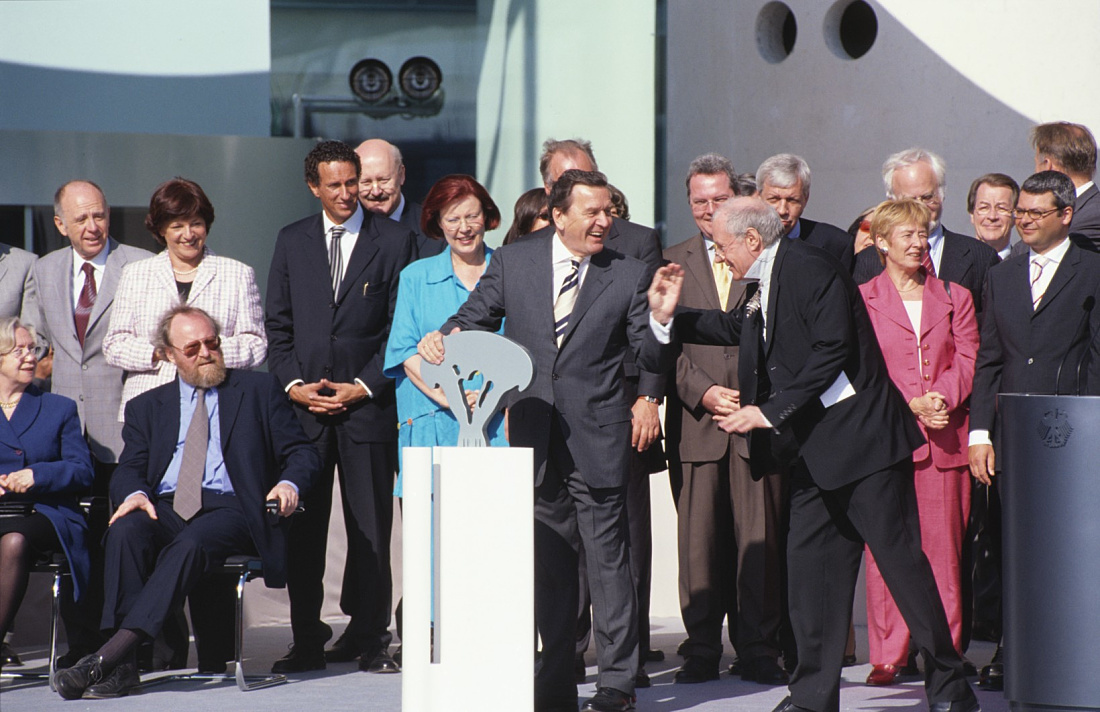 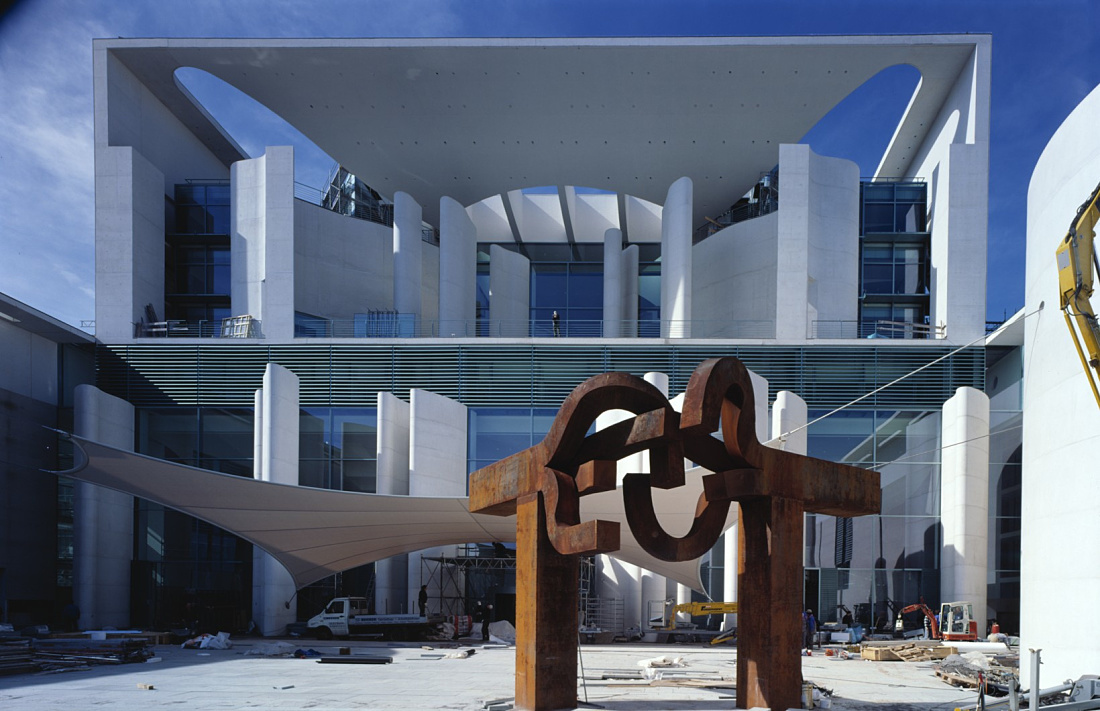 May 2nd, 2001: At its opening ceremony, the cour d'honneur of the chancellery stood its first acid test as stage setting of the media-democracy. Even the 90 ton steel sculpture, 'Berlin', by Eduardo Chillida almost seems dainty in front of such a backdrop. 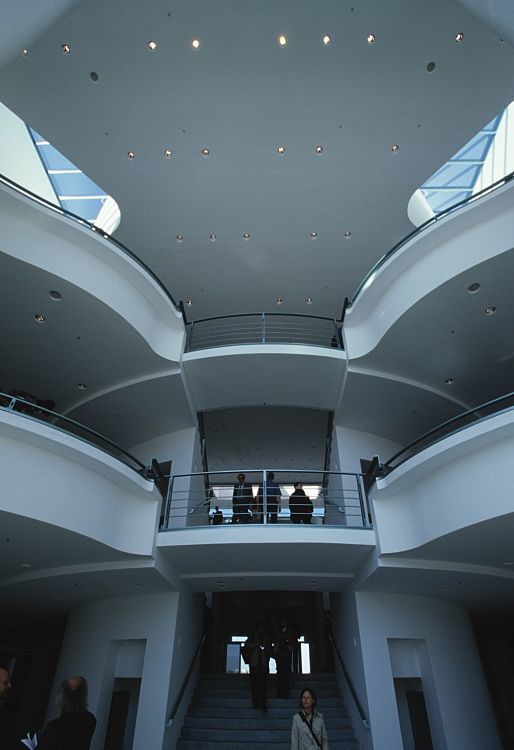 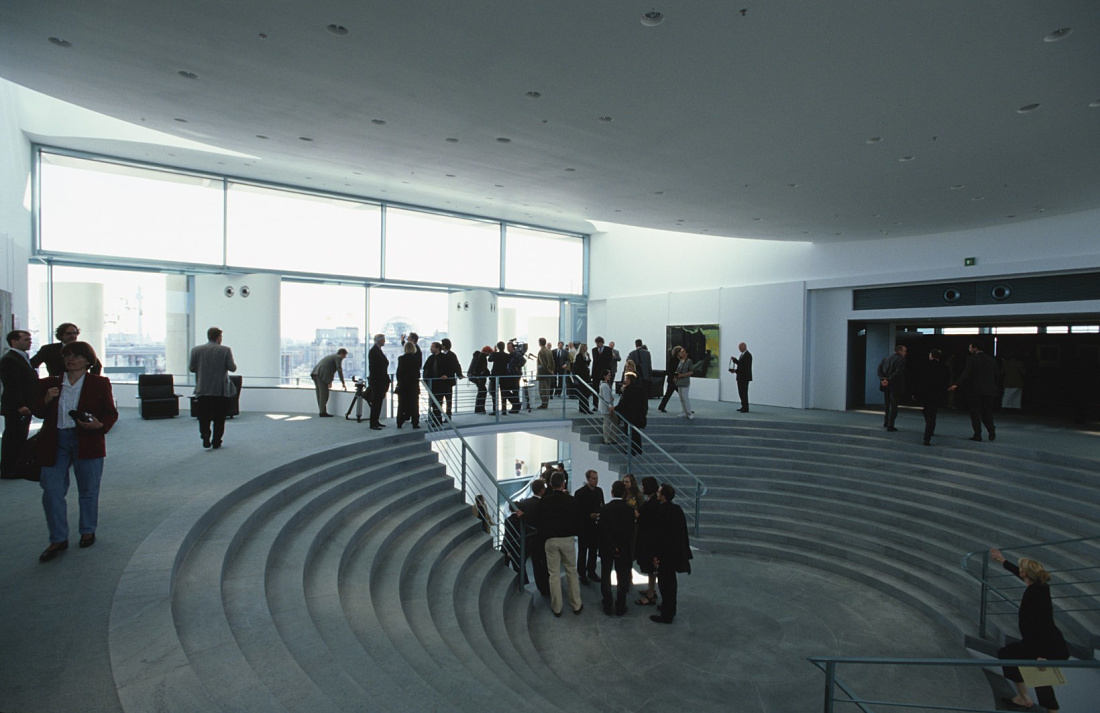 Schultes transformed the room into a symbol: the circular staircase with its foyers placed in front is the heart of the building and sets the scene for the work of government as the place for meeting, exchange and informal appearance. 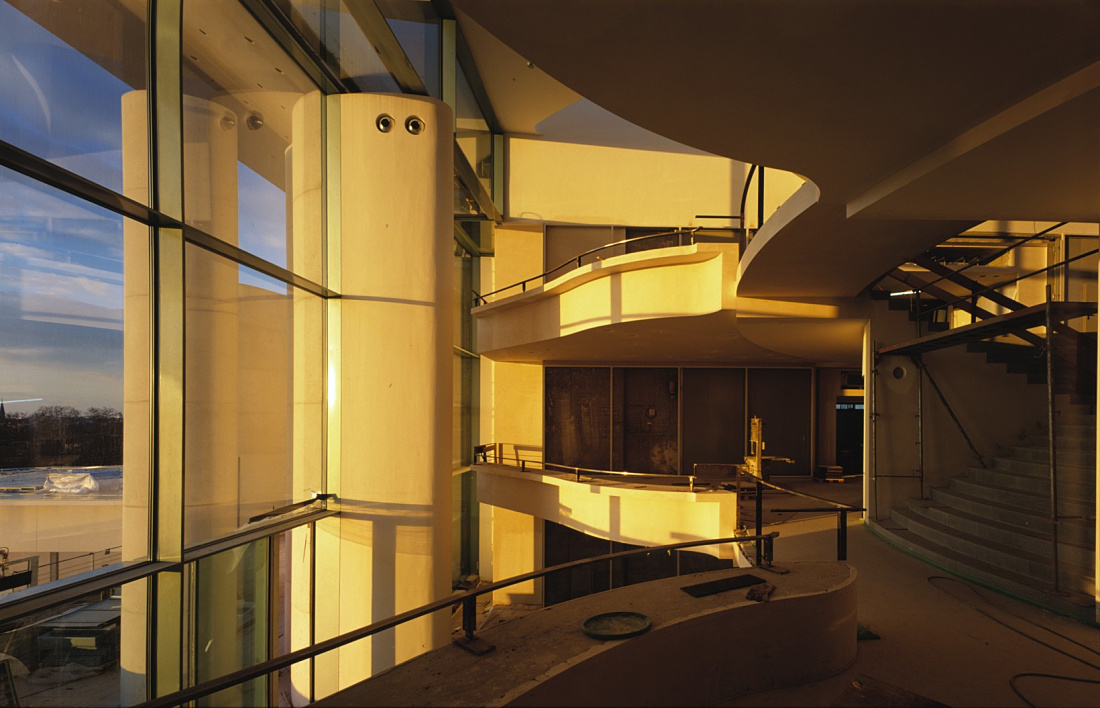 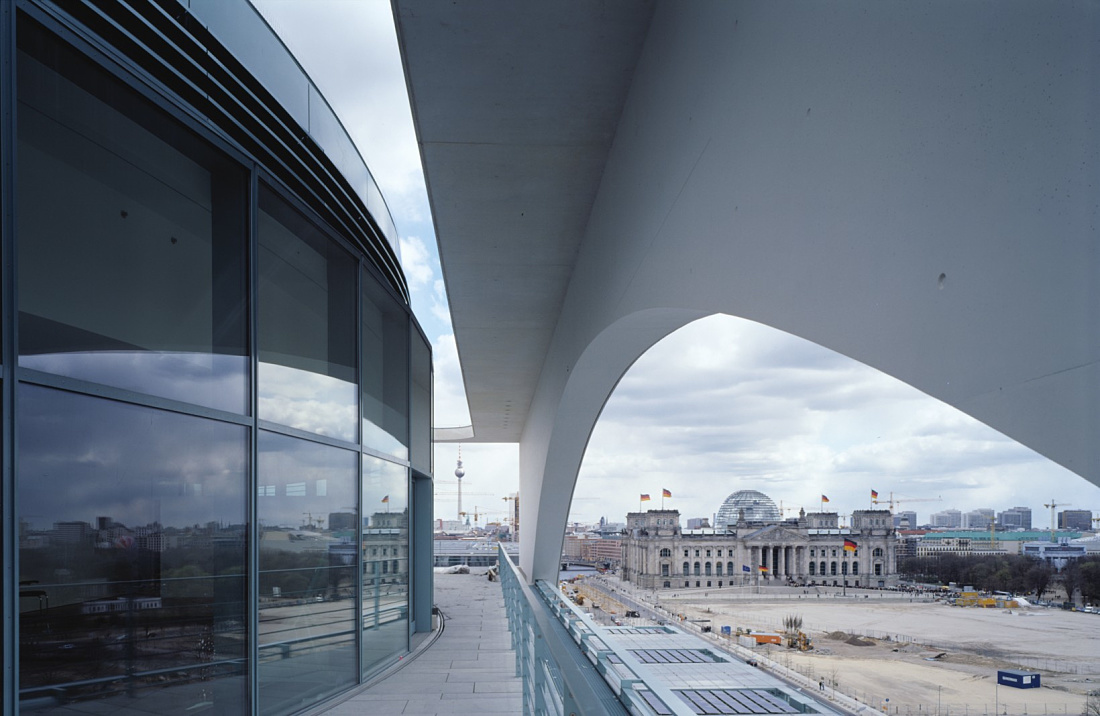 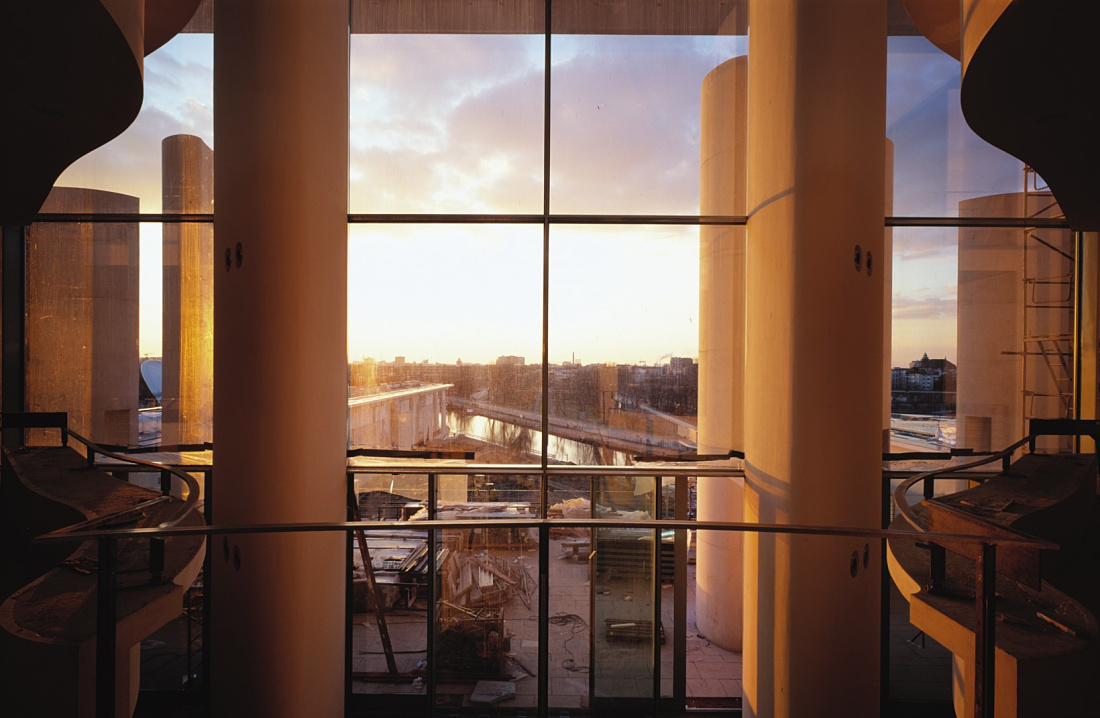 Views of the Chancellery: Some angles bring back memories of the style of Schultes' hero Louis Kahn, or equally of other modern architectures of government buildings such as those by Chandigarh or Brasilia. 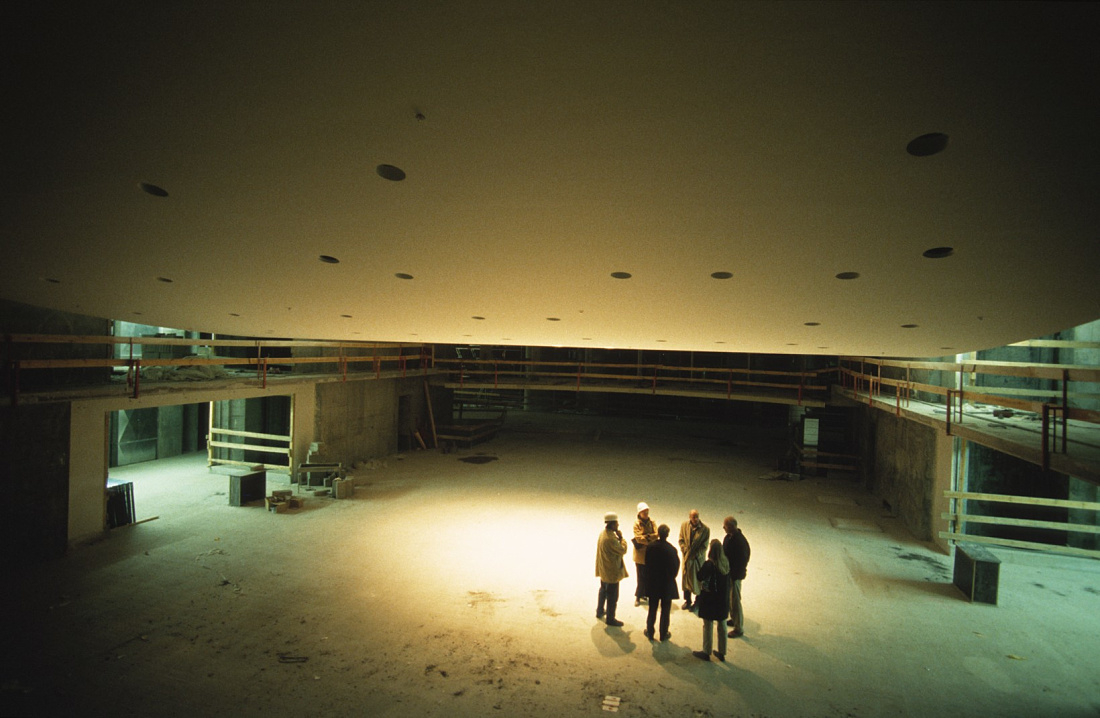 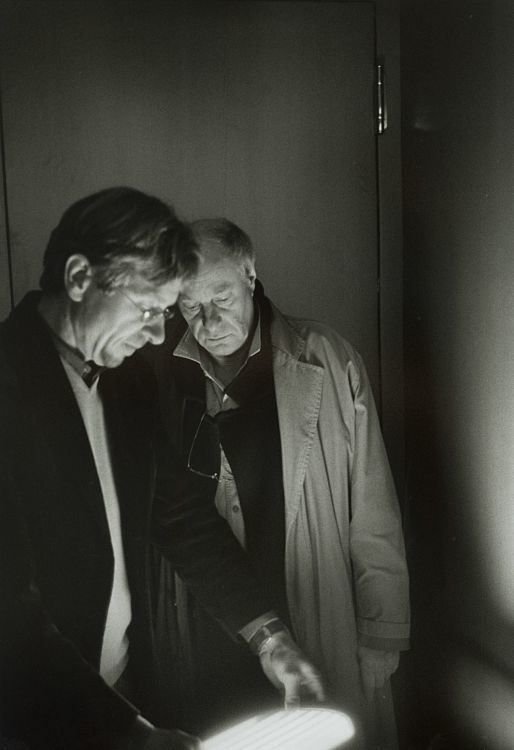 The architects of the Federal Chancellery have confronted the lighting designers with unusually precise ideas about the effect of the lighting. On the other hand, the willingness for close co-operation in the triangle of architect/lighting designer/luminaire manufacturer was also unusually high: more than one night was spent doing extensive lighting tests on the building site. 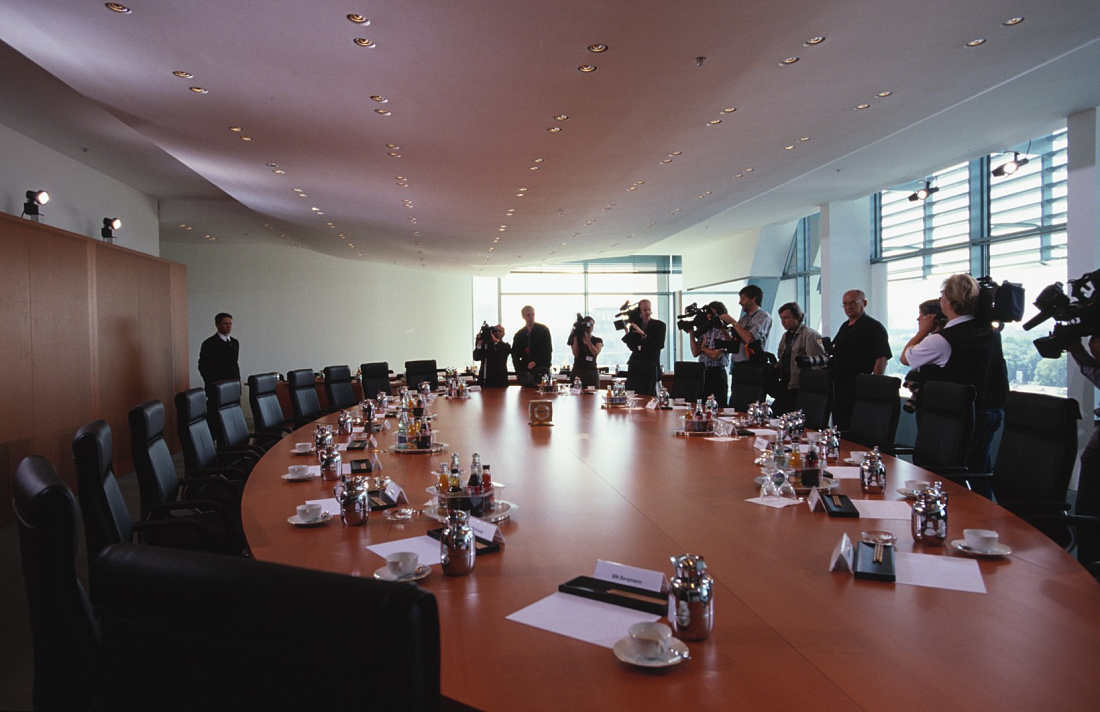 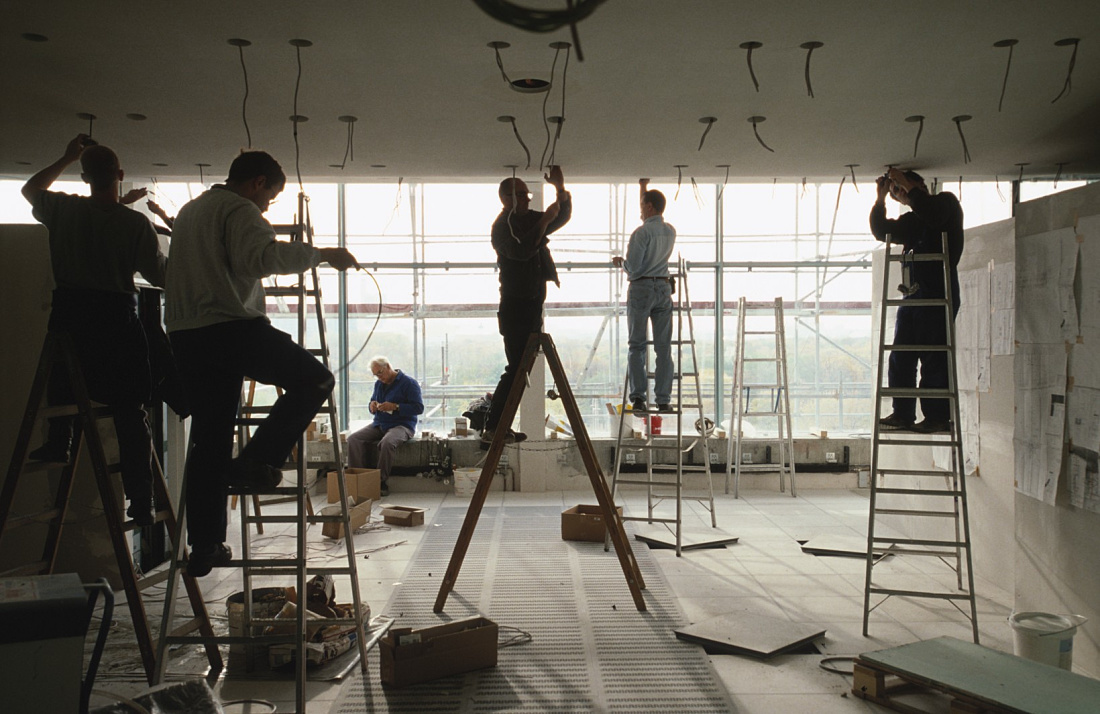 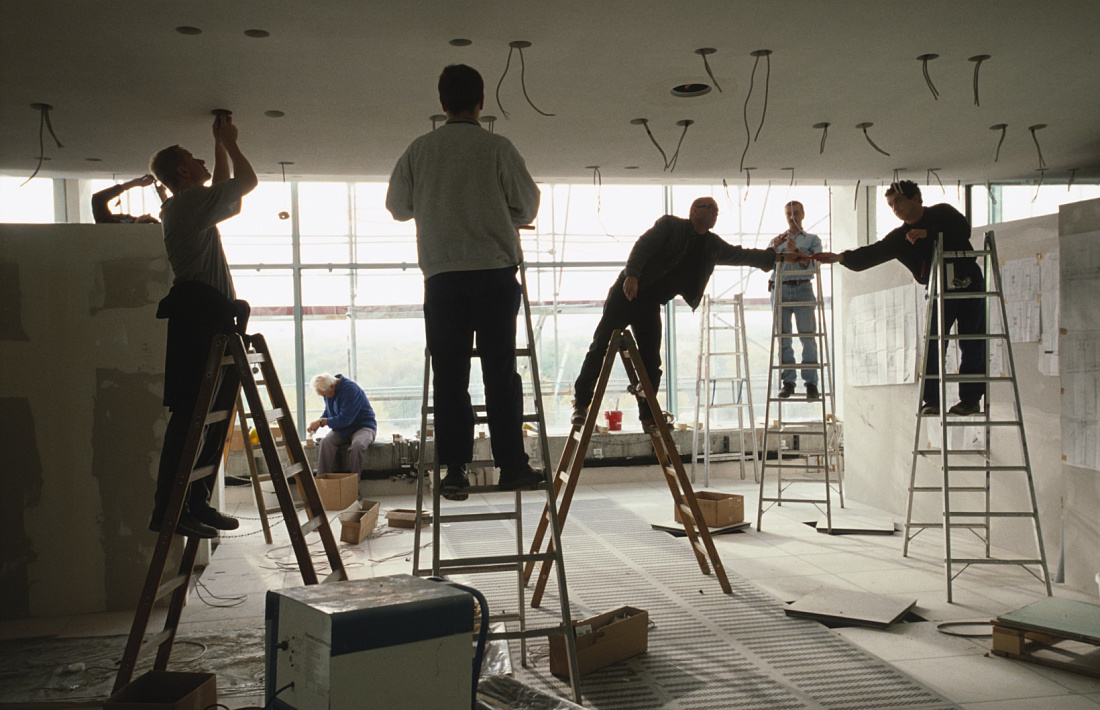 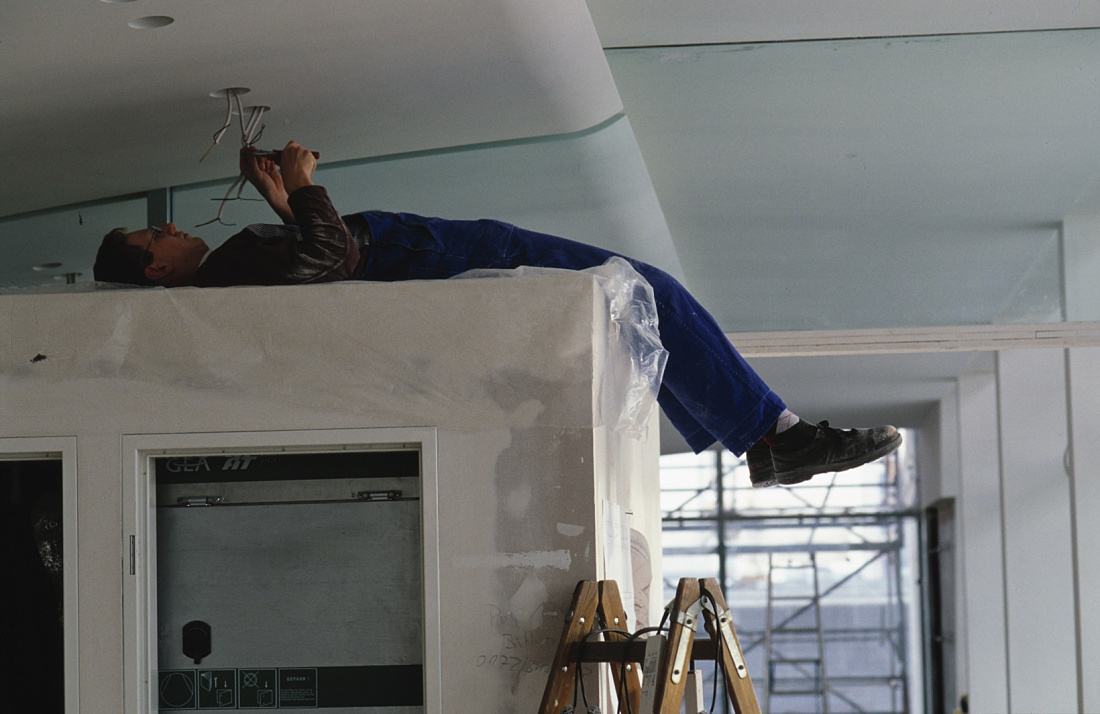 Low-voltage halogen downlights are arranged in pairs in the cabinet chamber. The luminaires are controllable and are wired in groups for different usage scenarios. 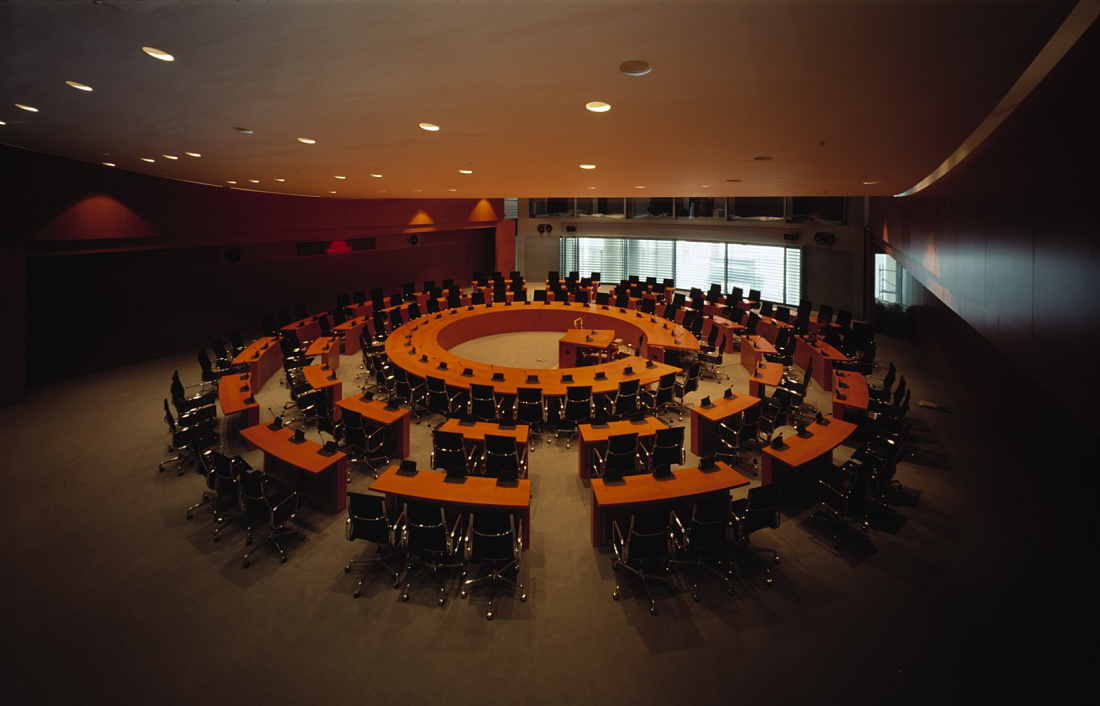 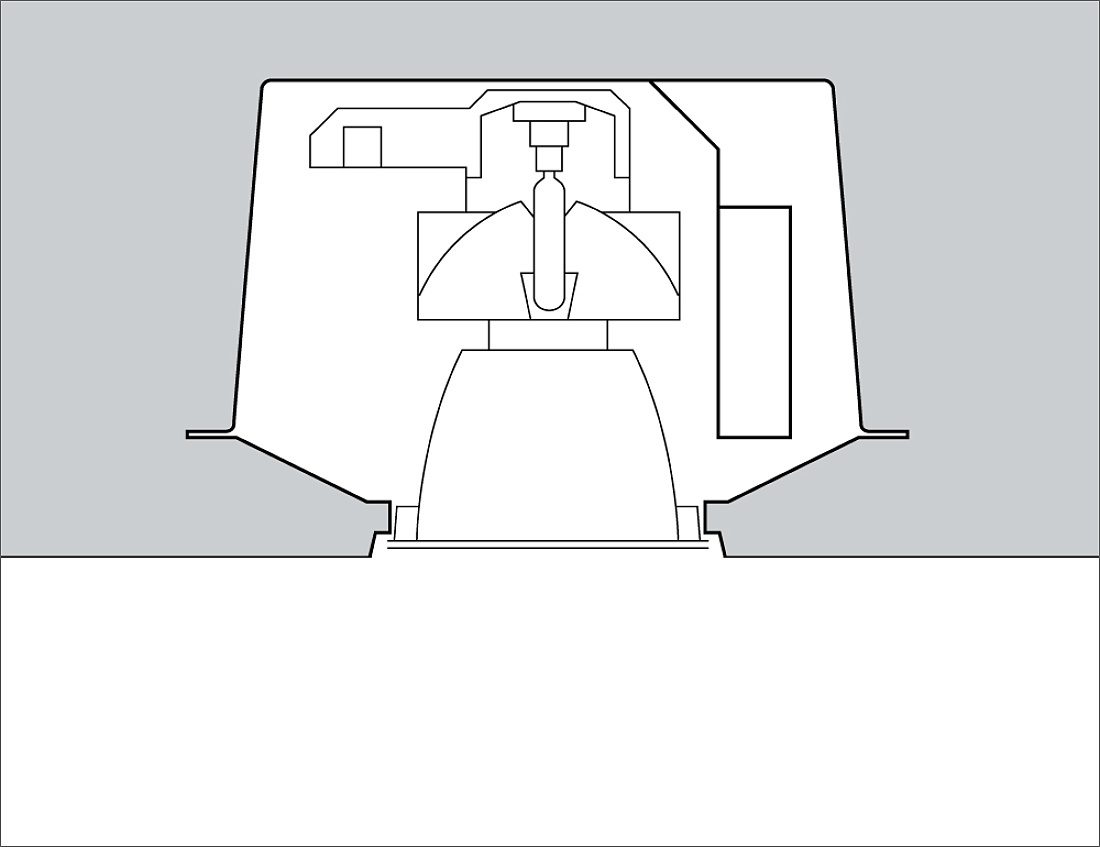 'Light from the hole' - the lighting concept in the chancellor's office can be summed up with this minimalistic formula. A special, rotationally symmetric housing for recessed mounting in concrete accommodates the downlights. The actual lamp fitted and the characteristics are different for each downlight: Depending on the purpose of use, metal halide lamps or, as here in the NATO hall, dimmable halogen lamps are used. All ceiling apertures have a uniform diameter of 170mm. The lamp cover is recessed 2cm into the ceiling and provided with an expansion joint.