In the heart of Seoul, the famous Gangnam District, adventurous travellers find a hotel not just for sleeping but also a highly unusual and exclusive location for staying, relaxing and enjoying. An ideal symbiosis of modern architecture and perception-oriented lighting design characterise the ambience and charisma of the new Le Méridien.

It is the role of giving a life to the space.

A prestige object from the very beginning

Five stars have always determined the DNA of this hotel, which even before renovation was one of the prime addresses of a chain of luxury hotels. The history of the Le Méridien hotel group began in 1972 with just one hotel in Paris – the Air France airline company wanted to give its crew and European flight passengers a "home away from home". Today more than 100 hotels in over 35 countries greet guests from all over the world. Since its inauguration on 1 September 2017 the hotel, as the first Le Méridien in South Korea, offers a stylish travel experience.
Lighting designers von bitzro & partners were commissioned with lighting design of the interior and the lighting concept for the outdoor areas was drawn up by the designers from EON SLD – both companies belonging to South Korea's leading lighting design practices. Lighting tools from ERCO translated the plans into reality, and all participants within the lighting scenario have a common philosophy of comprehending light as a further dimension of the architecture. 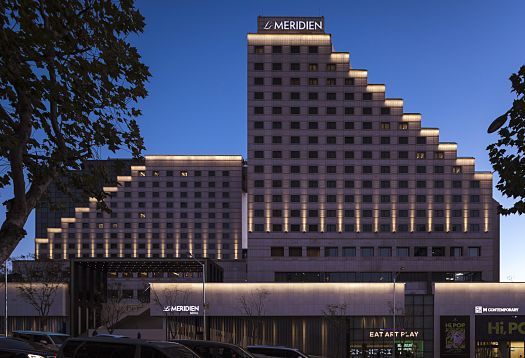 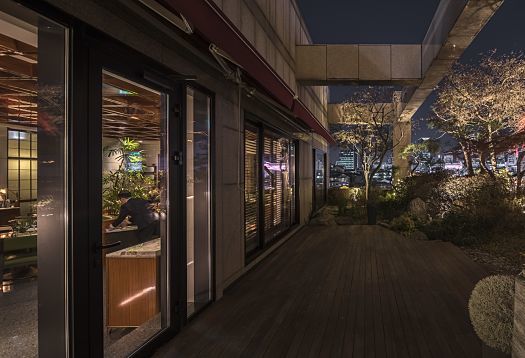 Seoul pulses with life. Centrally located in the popular Gangnam District, Le Méridien is the ideal base for diving into the huge city and experiencing at close hand the unmistakable mix of tradition, culture and lively bustle. Skyscrapers and expansive building complexes come together to create the cityscape of Seoul, from which Le Méridien saliently stands out – perhaps not primarily with its size but more through its highly noticeable architecture and illumination. Both features lend the hotel a unique presence, and during nocturnal hours a particular brand of magic.

A brilliant space can be born with creative light.

The light delineates the staircase-like contours of the two building sides from the base to the roof. ERCO Lightscan facade luminaires with narrow spot distribution and a warm white 3000K light colour frame both halves of the architecture to create a radiant pyramid. For the facade lighting, vertical elements as part of the architectural and lighting design-specific leitmotif were also focused on. The facade lighting concept was intended to extend and emphasise the theme of the 1950s from the interior – the lighting thus reflects the planar, linear and grid-shaped stylistic approach of that period.
ERCO Lightscan spotlights with narrow spot light distribution illuminate the vertical lamellae of the facade to create columns of light, uniting both building elements and displaying Le Méridien as a single unit.
The lighting represents the responsible handling of light within the urban space, and illumination of the vertical surfaces enables striking effects to be achieved with low levels of illuminance. Modifiable coloured lighting at the base of the building also lends the hotel an additional eye-catching effect. This, and the vertical facade lighting with warm light, serve to lift the building out of the cooler, peripheral light conditions of the city and provide guests with the feeling of entering a familiar and welcoming location. 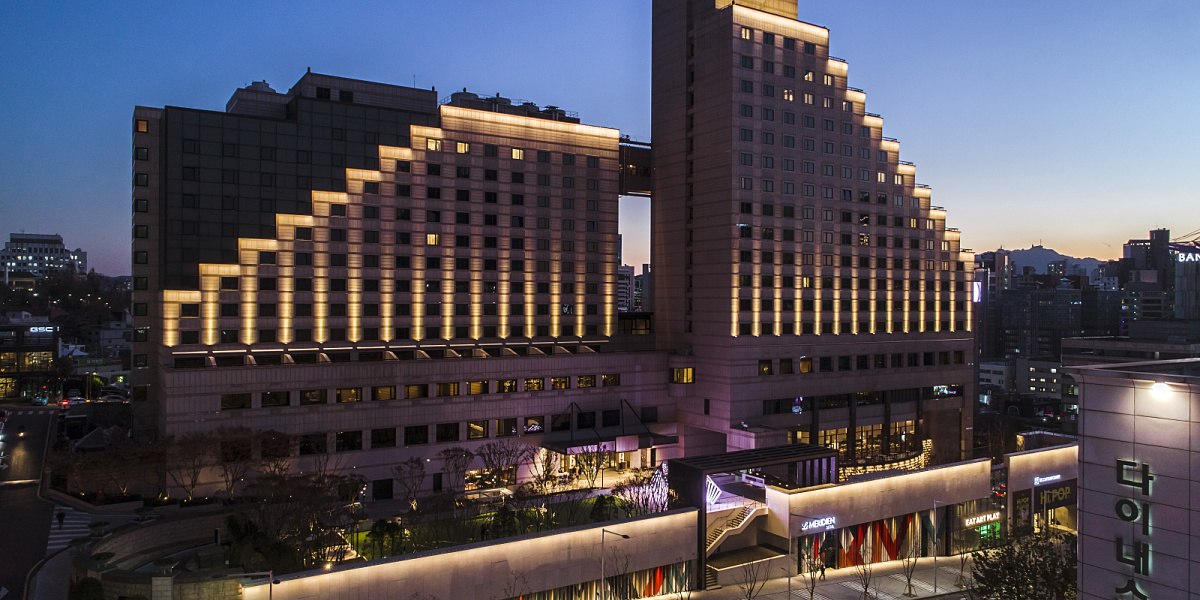 Guests entering the hotel are received in the brightly illuminated lobby. ERCO Quintessence spotlights with flood and wide flood light distributions illuminate the generously dimensioned reception area, ideally display the reception desks and offer guests good orientation.
An innate sense for beauty is firmly anchored within the Le Méridien philosophy: art lends the various areas of the hotel a museum-like character. The artworks themselves are strikingly displayed with light, and as visual hotspots attract the attention of guests. 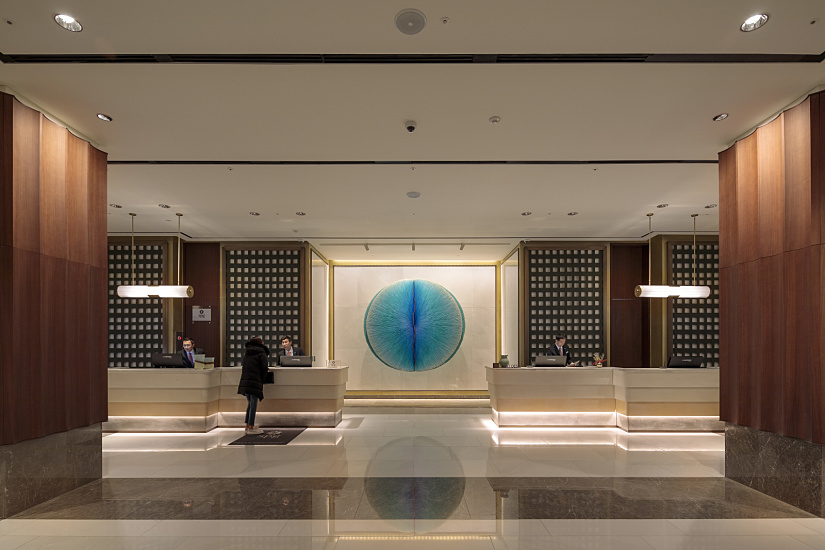 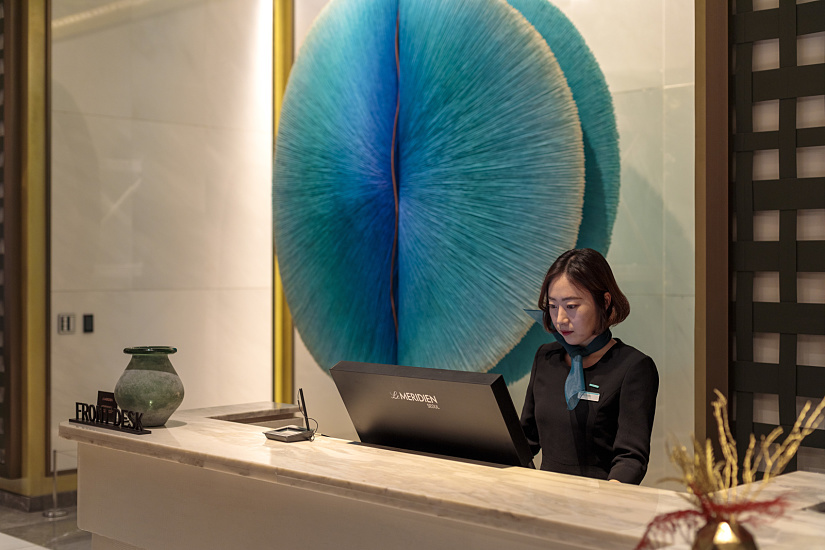 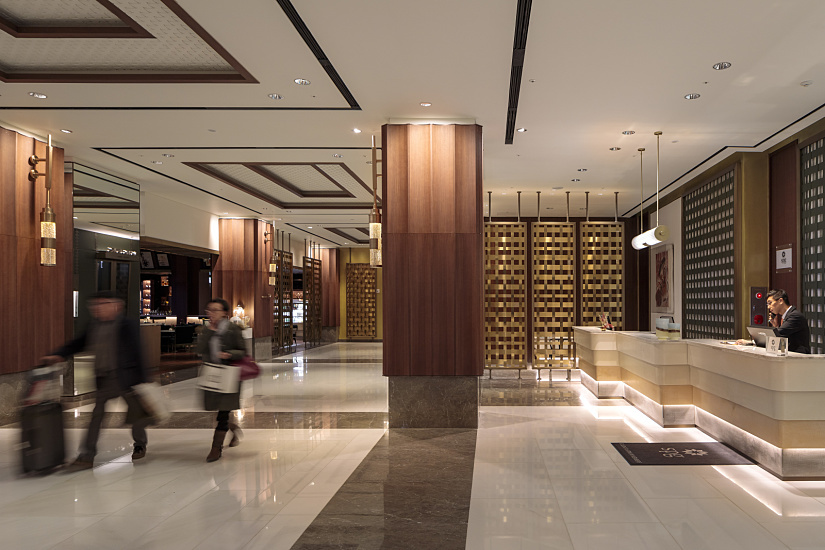 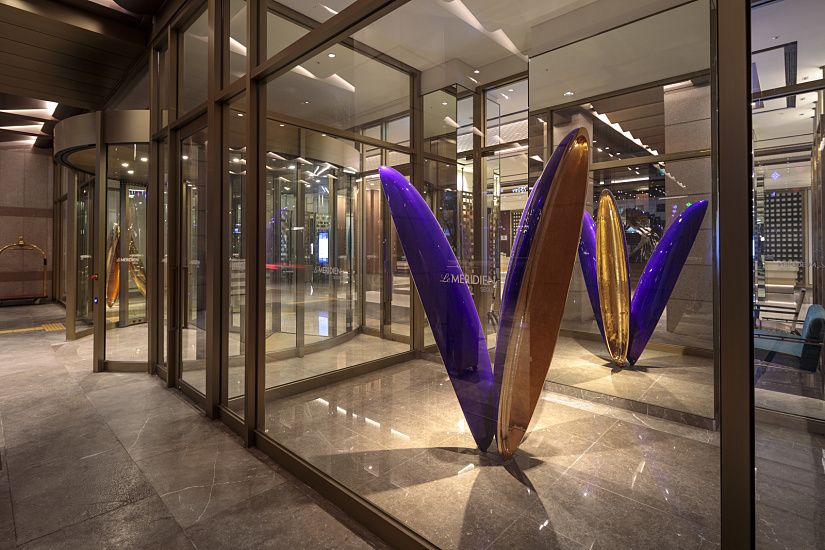 In the hotel rooms of Le Méridien designed in the style of 1950s Paris, the atmosphere of well-being is essentially created via light. Starpoint and Quintessence spotlights with a 3000K light colour accentuate the interiors of the hotel suites to create a pleasant ambience in the rooms. The luminaires also feature high levels of visual comfort and absolute glare control. The accent light simultaneously traces the contours of the rooms and emphasises the generous dimensions of the private areas.
Light creates a sense of magic – if the light source is not visible at first glance. ERCO recessed luminaires emphasise the refined interiors but blend discreetly into the background thanks to their purist design and compact installation sizes – a focus is placed on the light and its impact but not on the luminaire.
Guests can individually dim the light to create a homely atmosphere. The high visual comfort of the luminaires intensifies the impressive view across the skyline of Seoul.

The spatial borders in the private areas demanded focused light. 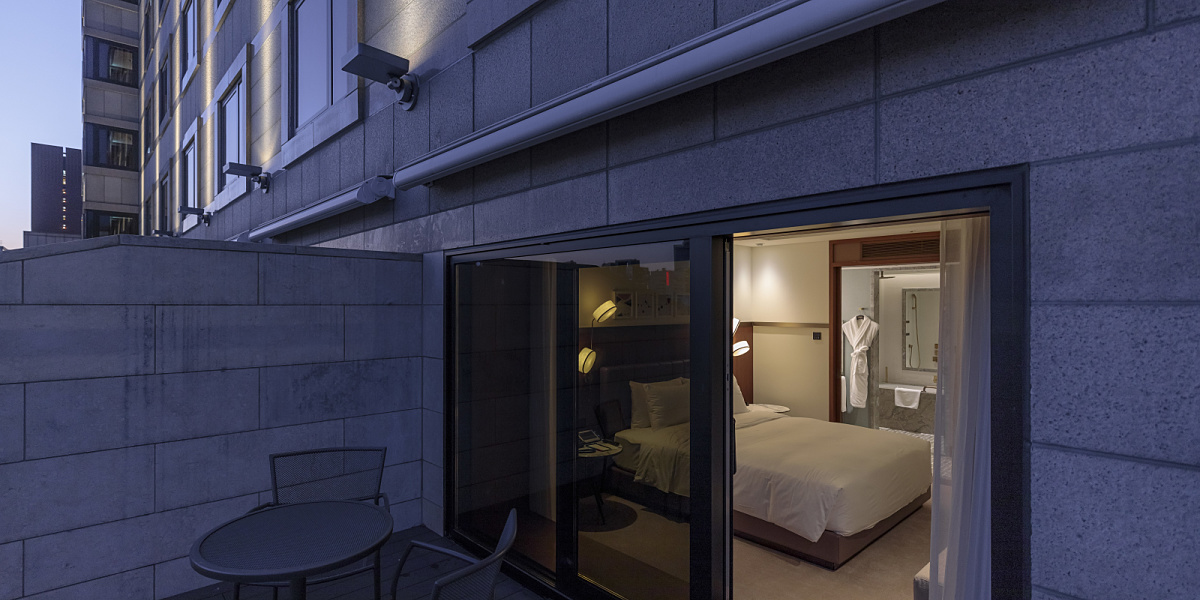 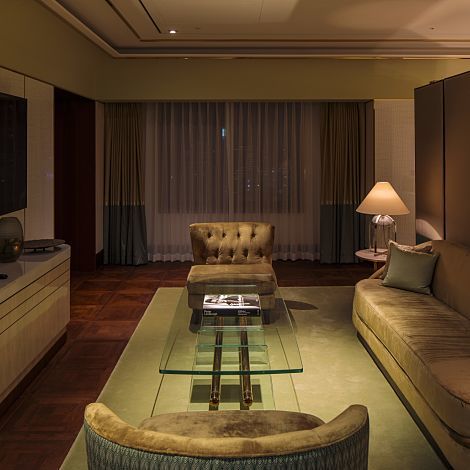 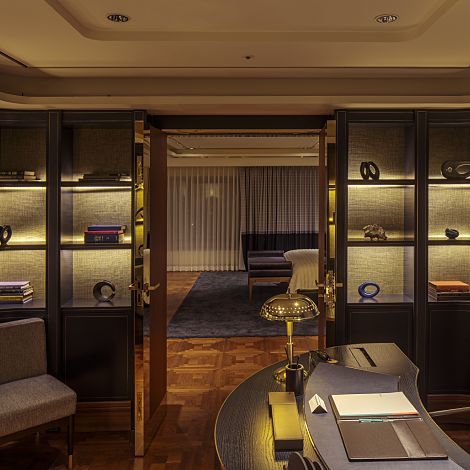 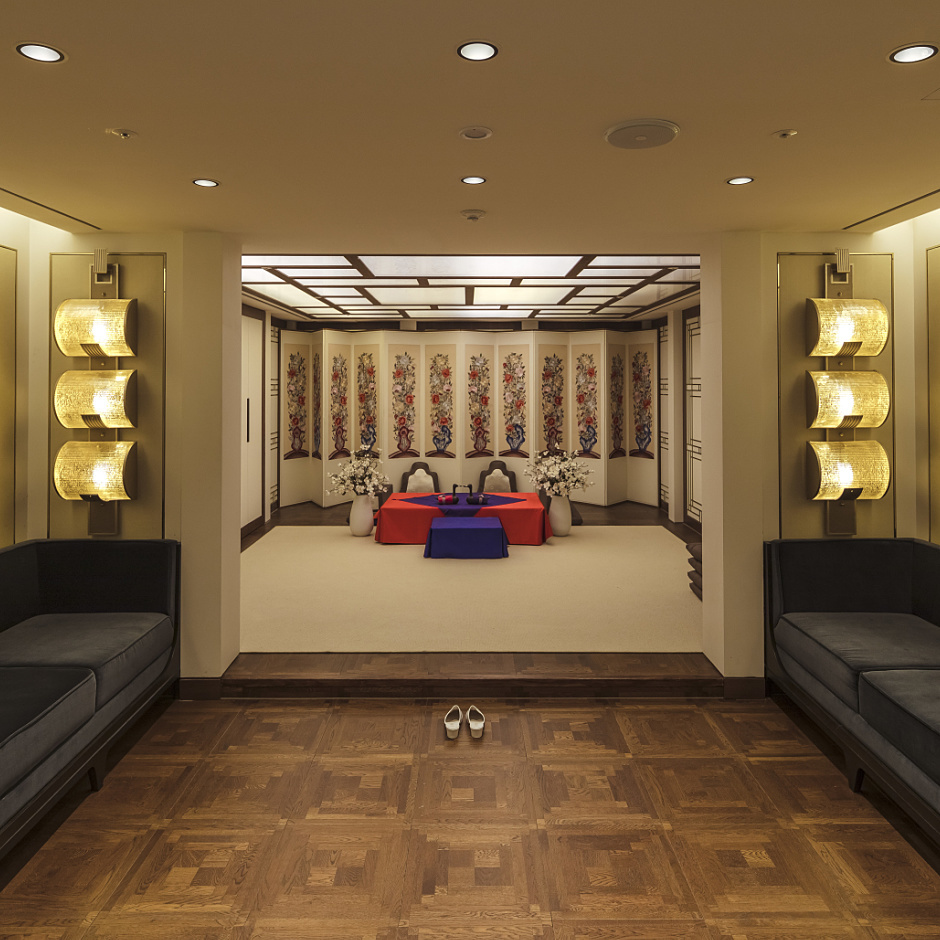 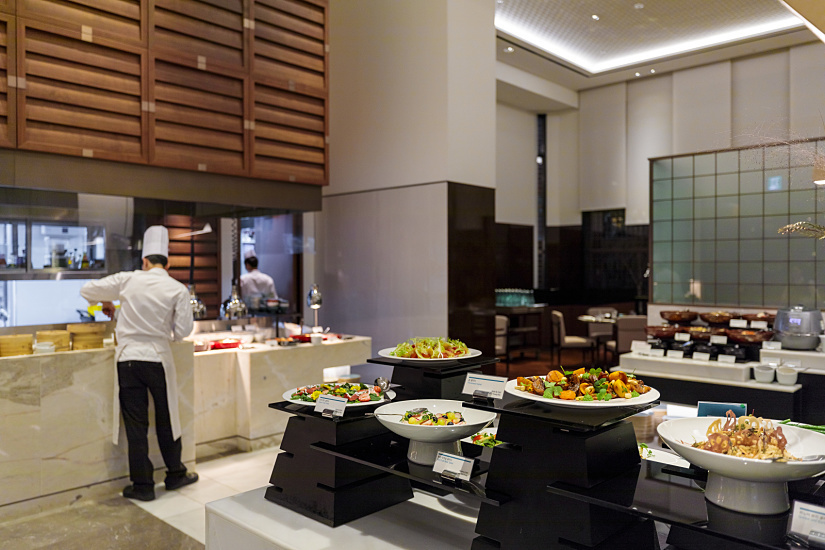 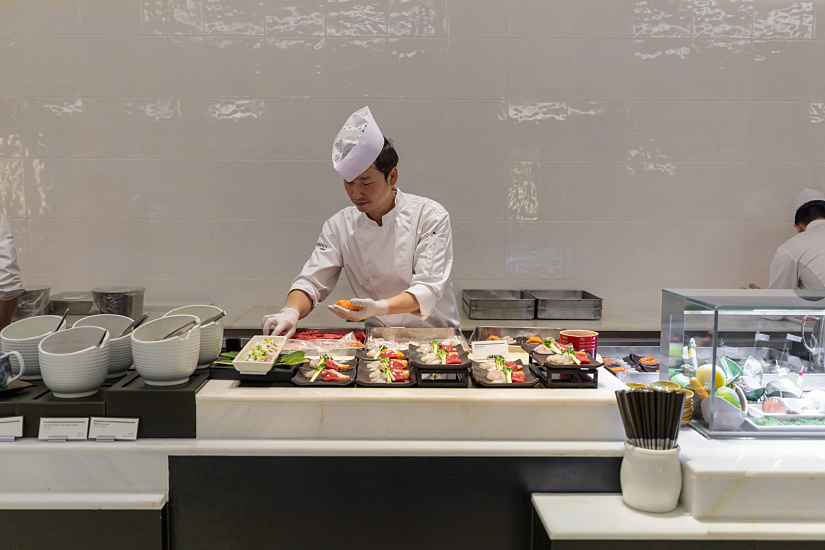 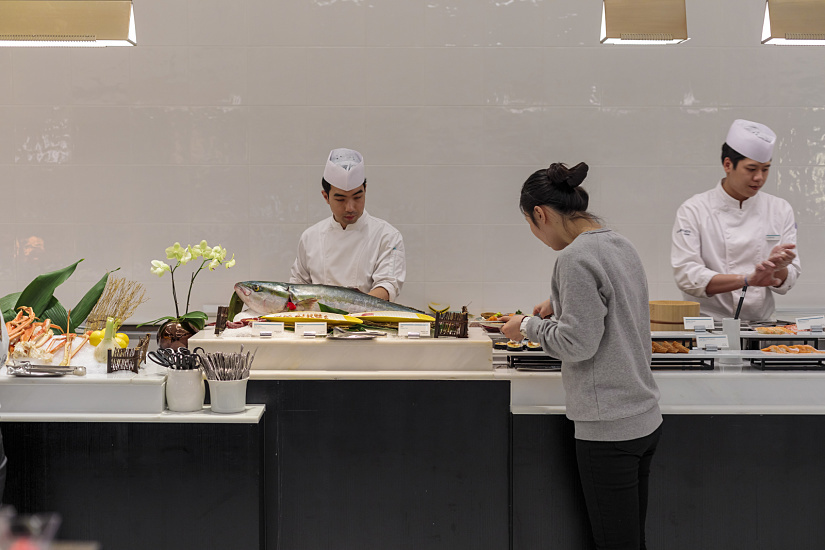 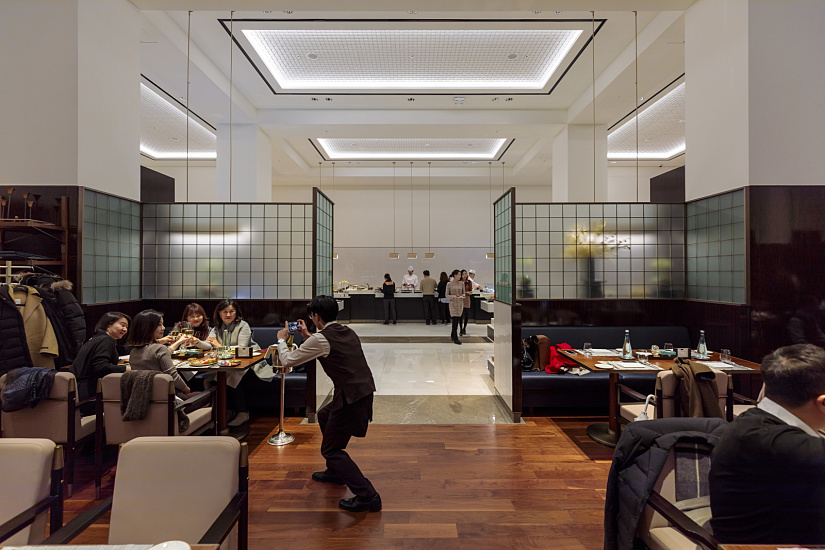 Whether indoors or outdoors – the complete project strove for maximum possible visual comfort. For this reason a focus was placed on quality of light during the lighting design stage. bitzro & partners aimed to achieve maximum light effect with as few luminaires as possible. Dimmable ERCO lighting tools and the possibility of using a single product range with various light distributions created a unique atmosphere of light to emphasise the exclusive character of the new Le Méridien.

Light is the final touch in architecture.

In this way light transforms Le Méridien from a hotel into a home away from home.