Entrenched in history, the Grand Hotel Principe di Savoia in Milan has been known to host notable guests such as Edward VIII and Charlie Chaplin. World-renowned Italian architect Marco Nereo Rotelli, best known for his highly creative light installations at landmarks around the world, has now transformed the hotel’s neoclassical façade into a page of luminous history using ERCO lighting tools in a design concept that includes Grasshopper projectors and Focalflood grazing light wallwashers to model the timeless elegance of the architecture.

Established in 1927, the Principe di Savoia has long become a landmark in Milan and one of the world’s foremost luxury hotels. Overlooking the Piazza della Repubblica, just a stone’s throw from the famous La Scala opera house and Milan Cathedral, it has been frequented over the decades by a long line of senior politicians, royalty, business moguls and showbiz stars. Among its most prominent guests were Queen Elizabeth II, Aristoteles Onassis, Henry Ford, David Rockefeller, Evita Peron and Elizabeth Taylor, who resided at the five-star establishment that, in 2003, became part of the Dorchester Collection owned by the Brunei Investment Agency. It was the latter who commissioned the Italian architect and light artist Marco Nereo Rotelli with the creation of a contemporary lighting concept that would dignify the magnificent neoclassical façade that rises up ten storeys. 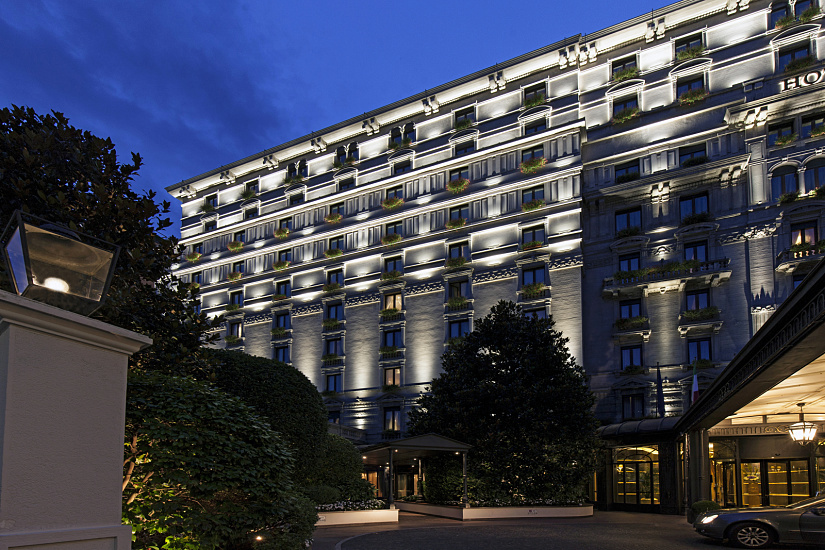 “We used ERCO Focalflood LED to wash the wall with a diffuse light and underline the horizontal scan of the architecture", Marco Nereo Rotelli, architect and light artist

The lighting concept devised by Marco Nereo Rotelli builds on neutral white light at 4000K, using 8W Grasshopper projectors with narrow spot and spot light distributions in artful combination with Focalflood grazing light wallwashers for a stunningly creative symbiosis that enhances the elegant and timeless qualities of the façade with its distinctly horizontal scan and simple, regular rhythm of the windows. By manipulating the light distribution across the façade to intensify from base to soffit, the light artist toned down the hotel’s seemingly massive exterior, creating instead the impression of weightless architecture towards the top of the five-storey structure, with a roof that appears to be floating.

"Our line of approach was clear from the first survey of the site," explains Marco Nereo Rotelli, who developed the lighting concept in collaboration with the architects Margherita Zambelli, Elena Lombardi and Filippo Cavalli. "We wanted a lighting design for the façade that encapsulated the horizontal character and the rhythm of the architecture without incorporating the window areas to ensure optimal visual comfort in consideration of guests in the rooms and suites."

Today, innovative and exceptionally energy-efficient ERCO LED lighting tools illuminate the hotel’s neoclassical façade in a wash of brilliance. "We used ERCO Focalflood LED to wash the wall with a diffuse light and underline the horizontal scan of the architecture," says the light artist. Grazing light delivers incredibly effective illumination of building surfaces and emphasises details through high-contrast shadows – such superb results are achieved with Focalflood façade luminaires.

Optimised for grazing light, their lens system enables wide luminaire spacing, still producing excellent uniformity on the façade. The Focalflood façade luminaire offers a highly precise, narrow light distribution over the whole wall to minimise spill light. In consideration of guests in the rooms and suites, the windows of the hotel are not illuminated to provide optimal visual comfort.

Rounding off the lighting design, ERCO Grasshopper projectors in 8W, neutral white light at 4000K with narrow spot and spot light distribution, are installed along the base of the Grand Hotel, effectively accentuating the vertical structuring of the neoclassical pilasters in the façade all the way to the roof – a considerable achievement given the compact design of the lighting tools. What’s more, the superior efficiency and robust quality of the in-house developed ERCO LED technology help reduce maintenance and operating costs.

Even more so, the projector delivers glare-free light with absolute photometric precision, ensuring that the view for passers-by and guests of the hotel is not disturbed by spill light. The result presents a new attraction in Milan’s nocturnal landscape: with the upgrade of its illumination, the Principe di Savoia now catches the eye from afar – in a design that reflects its reputation as one of the world’s foremost luxury hotels. 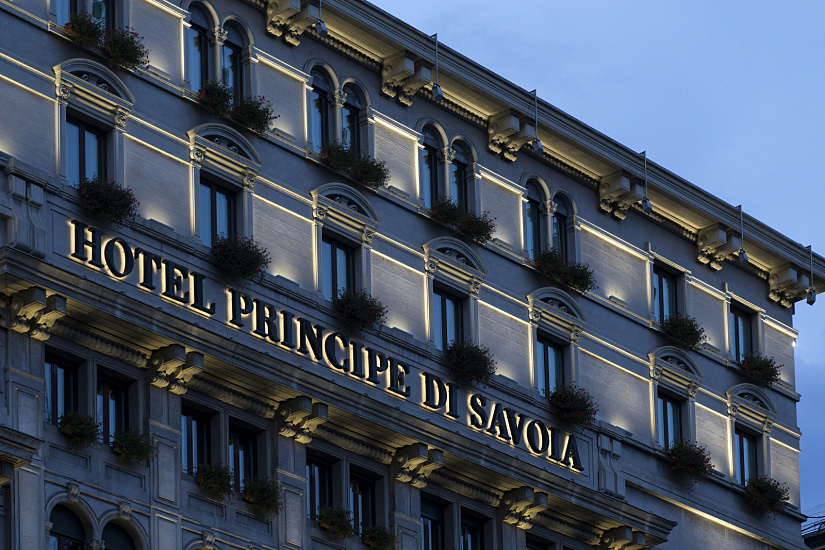