One of the most prestigious lighting projects to have been completed in recent years’ is now open for business – since April 2015, the date of the city’s birthday, the ancient Imperial Forums in Rome have been illuminated in striking new light. The narrative lighting concept was implemented with ERCO lighting tools. 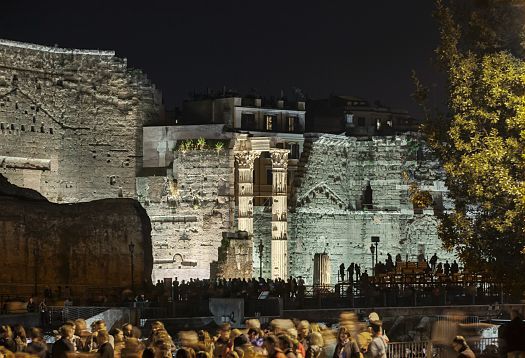 It felt a bit like a movie premiere. On the eve of April 21st, traditionally celebrated in Rome as the city’s official birthday, many VIPs gathered at the Fori Imperiali – as well as the mayor, the Minister of Cultural Affairs together with other invited guests, numerous press and media representatives and around 35,000 Romans and tourists interested in the event came together for the event united in a common goal of experiencing the launch of the new lighting installation for these ancient monuments. The project, which involves the extensive sites of the Imperial Forums (extending across the Capitoline, Palatine and Quirinal hills), had come into existence on the initiative of the Mayor of Rome, Ignazio Marino, and courtesy of the Sovrintendenza Capitoline (the Superintendence of Cultural Heritage in Rome). The lighting concept and its application were entrusted to Professor Vittorio Storaro and architect Francesca Storaro whilst the implementation was supervised by Acea Illuminazione Pubblica Spa, the Italian company dealing with the management of public, functional, urban and artistic lighting and related installations. As night began to fall, and luminaires for these ancient monuments were switched on individually, accompanied with synchronised explanations by Vittorio und Francesca Storaro, the audience burst into spontaneous applause, fascinated by a scenographic feat that revealed the relics in an entirely new light. 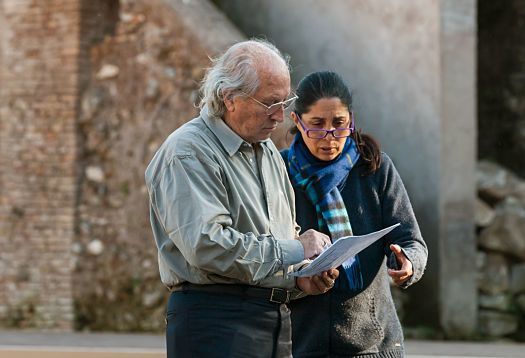 Telling the story of Roman architecture with light
The ancient Imperial Forums in Rome are a prominent archaeological site in the Italian capital and some of the most prized cultural artefacts of the “Eternal City” with its rich heritage of art treasures. Five monumental public squares, once surrounded by majestic buildings, were constructed in the early imperial period as an extension to the Forum Romanum. Each was named after the emperor who built them, and although the forums today may look like a disorderly collection of ruins, they still hint at the past glory and architectural splendour of this ancient metropolis. Vittorio und Francesca Storaro applied themselves to this mission and designed a lighting concept for the Imperial Forums that set ambitious goals. Their idea was to use the visual language of light to tell the story of prominent historic characters and their structures. Light and architecture fuse together in perfect synergy to present the illustrious personalities of the three emperors Augustus, Nerva and Trajan, as well as the symbolic content of the forums which each erected.

The lighting concept for the individual forums, as the experts described, is based on specific fundamentals: “monodirectional for the Forum of Augustus, axial for the Forum of Nerva, and centrifugal for Forum of Trajan.” By employing the imagery of light, each forum stands out with emphasis on their central elements, whilst warm white light (3000K) illuminates each of their characteristic architectural details, all other areas of the forums are illuminated using neutral white light (4000K). The warm white light for the Forum of Augustus centres on the Temple of Mars Ultor, whereas in the Forum of Nerva it gives focus to the Colonnacce and the foundation of the Temple of Minerva, and in the Forum of Trajan, finally, illuminates the Column of Trajan and the Basilica Ulpia. In a manner of speaking, the notion of warm white light, so the Storaros, originates from the very individuals they represent, given the fact that the Roman emperors liked to carry the symbol of the sun as a sign of deity and throughout their history led their subjects to a path of sunlight. Explaining the substantive grounds for the lighting concept, Vittorio and Francesca Storaro continue: “We identified the need to strike a balance between the three great emperors and the peace they sought to maintain in their conquered regions, and with this in mind, we created the whole area around the centre of each forum to resemble an ambience of moonlight, symbolising the vital harmony between humanity and deity, between the moon and the sun.” 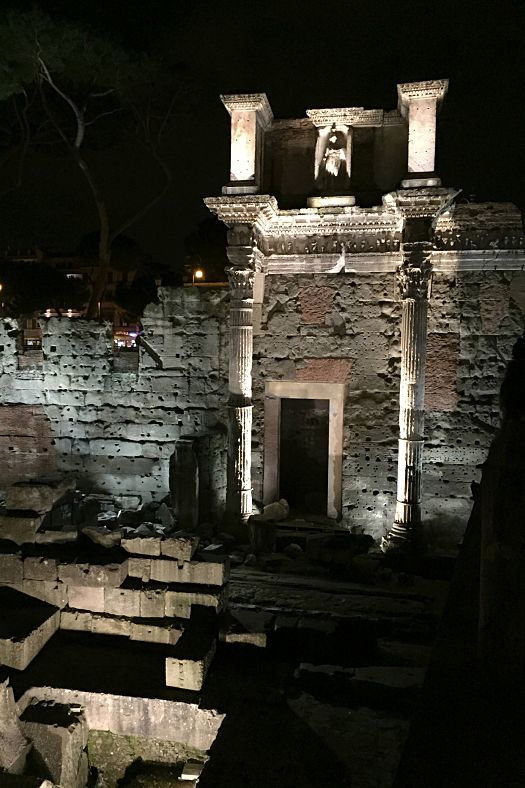 The challenge: Precision and flexibility, efficiency and low maintenance
The lighting design for the three forums posed a significant challenge to the concept. The basic specification stipulated using the latest and most energy-efficient LED luminaires for maximum effect whilst the clients also placed great emphasis on a long service life for the luminaires. Their primary thought, as well as to ensure a sustainable investment, was to keep any necessary maintenance in this archaeologically sensitive area to an absolute minimum. The prime concern for the Storaros, meanwhile, was optimal implementation of their design concept, which required lighting tools with flexible yet precise light distributions.

Given these factors, the decision to realise the prestigious lighting project with ERCO luminaires speaks for itself. It confirms once more the excellent quality of ERCO products with respect to the criteria driving this decision. 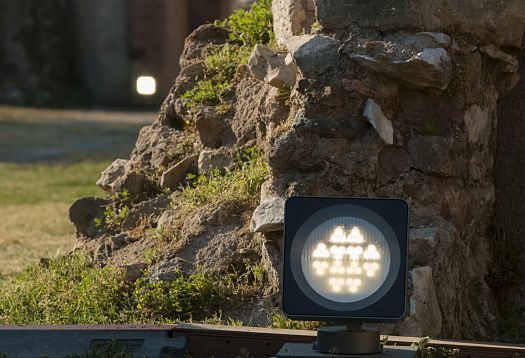 An elaborate process for perfect illumination
Work on this project commenced in August 2014 and once the lighting design was completed, focus was given to planning the photometric details of the lighting concept, which involved meticulous technical tests conducted in the actual Forums from January 2015. The installation of the luminaires on site and the required technical aspects took a good five weeks of intensive work in March and April this year. The Storaros used this time to polish their concept. Assisted by the Sovrintendenza Capitolina, the Italian the Department for the Preservation of Historic Monuments and Buildings, an ERCO lighting consultant and the experts of Acea Illuminazione Pubblica, the lighting designers tweaked the exact positioning of the luminaires, their ideal light distributions and luminous intensity. At the bidding of Vittorio Storaro, who requested a very soft progression of light intensity in places, the Spherolit lenses were fitted with filters. Those who witnessed this intensive work phase were impressed by the diligence, professionalism and scrupulous quality standards applied by the lighting designers – right up until the work was completed two days after the premiere, but the result justifies the effort. 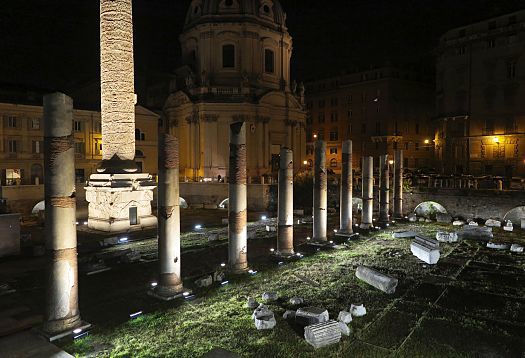 Storytelling with light
For the relighting of the Imperial Forums, together an area of around 20,000sqm, Vittorio and Francesca Storaro selected projectors, floodlights and wallwashers – Lightscan, Parscoop, Grasshopper and Beamer – alongside Lightscan and Focalflood façade luminaires from ERCO’s extensive range of outdoor lighting tools. Altogether, around 520 luminaires with a total output of 26kW were used for the project. With the exception of Focalflood, the models are used in each case with different wattages. Especially when combined with the interchangeable ERCO Spherolit lenses, which enable a wide range of light distributions, the result is a differentiated concept that achieves the high standards required by a narrative lighting project of such complexity.

The use of two light colours – neutral white and warm white – gives prominence to the architectural structure of the Imperial Forums. Luminaires with warm white light illuminate the architectural elements peculiar to each forum. In the Forum of Nerva, these are the Colonnacce with the Minerva relief – a fragment of the colonnade that once encompassed this forum. The Forum of Augustus centres on the Temple of Mars Ultor. Focus in the Forum of Trajan, finally, is given to the Column of Trajan and the double colonnade of the Basilica Ulpia. Neutral white light is used as a contrast for all other objects and surfaces that, in a manner of speaking, serve as background to the main attractions. As a central aspect of their lighting concept, the lighting designers were able once more to rely entirely on the superior quality of ERCO LED technology: Thanks to the strict specification of only the best LEDs, ERCO lighting tools guarantee optimum colour consistency. Magic grazing light for the Column of Trajan
The relighting of the ancient Imperial Forums stands out equally from an aesthetic and a didactic viewpoint. The extraordinary quality of this lighting project is evident, no more so than on the famous Column of Trajan. Measuring around 30 metres in height, this ornamented column, which tells of the famous crusades of the emperor in an almost cinematic style, can only ever be “deciphered” partially in daylight. Grazing light alone ensures that the shallow relief of this picture story is visible with sufficient clarity. Illuminated at night, the tale now unfolds continuously and from every angle – an aesthetic and historic asset that the world owes to Maestro Storaro and architect Francesca Storaro. 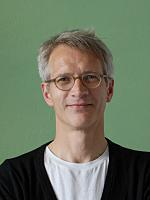 Mathias Remmele works in Berlin as a freelance publicist and exhibition curator with focus on architectural and design history. As a critic, he also deals with modern developments in this field. In addition, he is a lecturer at the University of Design and Art in Basel.